The headline in this year’s Jan. 16th St. Louis Post-Dispatch was frightening by any standard: “Bloody St. Louis sees 7 killings; 3 arrests.” The piece went on to detail six shootings over a 13-hour stretch that killed seven people, including a single mother of two and a hotel night manager.

But just as it’s never pointed out that thousands of aircraft landed safely on the day of a plane crash, a little perspective can place this tragedy in some context. Violent crime in St. Louis peaked in 1993, and in 2013, the last year for which data is available, the violent crime rate was lower than it was in 1985. 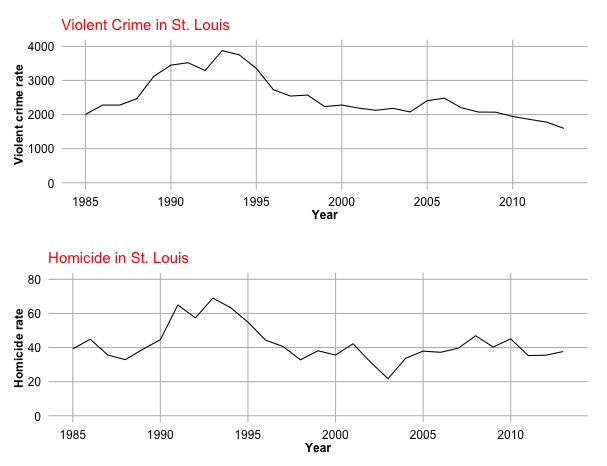 Today, the national crime rate is about half of what it was at its height in 1991. Violent crime has fallen by 51 percent since 1991, and property crime by 43 percent. In 2013 the violent crime rate was the lowest since 1970. And this holds true for unreported crimes as well. According to the National Crime Victimization Survey, since 1993 the rate of violent crime has declined from 79.8 to 23.2 victimizations per 1,000 people. Americans who lived through the 1960s and 1970s remember the fear associated with a real surge in violent crime. In fact, the violent crime rate increased by 126 percent between 1960 and 1970, and by 64 percent between 1970 and 1980. The Brennan Center recently issued a report examining 14 theories for why crime declined in the U.S. so dramatically since the early 1990s. According to our empirical analysis, the greatest contributing factors in the crime drop were aging population, changes in income, and decreased alcohol consumption.

This chart shows the dramatic increase, and equally dramatic drop, in violent crime in the U.S. over the past 50 years. 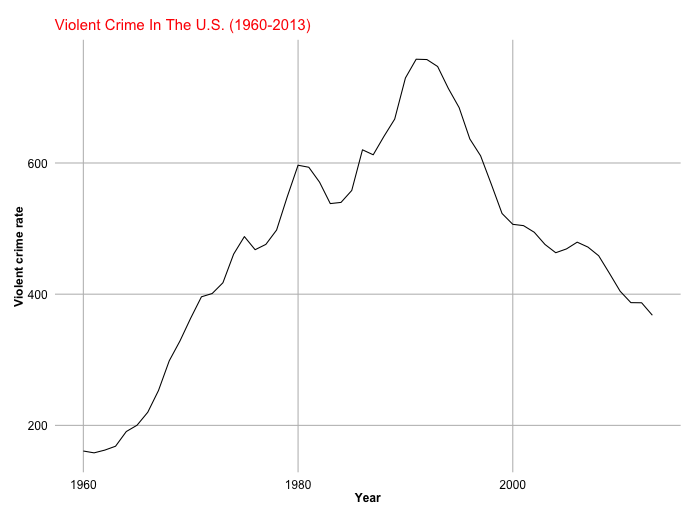 But despite not knowing exactly why crime declined so dramatically, it appears that many Americans are not even aware that it did.

One would think that with the dramatic drop in crime, America’s communities would be reveling in the streets as though it were Mardi Gras, or at least talking about how much safer they feel walking around their neighborhoods as adults than they felt walking the streets as teenagers. But decades of Gallup polls indicate otherwise.

According to a Gallup poll from November 2014, despite dramatic declines in the nation’s violent crime rate, a majority of Americans say "there is more crime in the U.S. than there was a year ago," which reflects a long-term Gallup trend. Currently, 63 percent of Americans believe crime is up over last year. The reality, again, is different. Crime statistics released by the FBI also in November 2014 revealed that the estimated number of violent crimes in 2013 decreased by 4.4 percent when compared with 2012 figures, and the estimated number of property crimes decreased by 4.1 percent.

Government statistics show that, except for some small blips, serious crime has decreased almost every year from 1994 through 2013. For over a decade Gallup has found that the majority of Americans polled believe crime is up, contrary to the fact that crime rates have plummeted in almost every small and large city since the 1990s. This is not to say that all cities and areas are experiencing decreases in violent crime year after year, but the overall rate of violent crime is significantly lower than historic levels.

We can gauge public perception of crime in other ways as well. In the figure below we can see the trends in the homicide rate, as well as the number of mentions of “murder” or “homicide” in New York City’s and St. Louis’ major newspaper headlines. 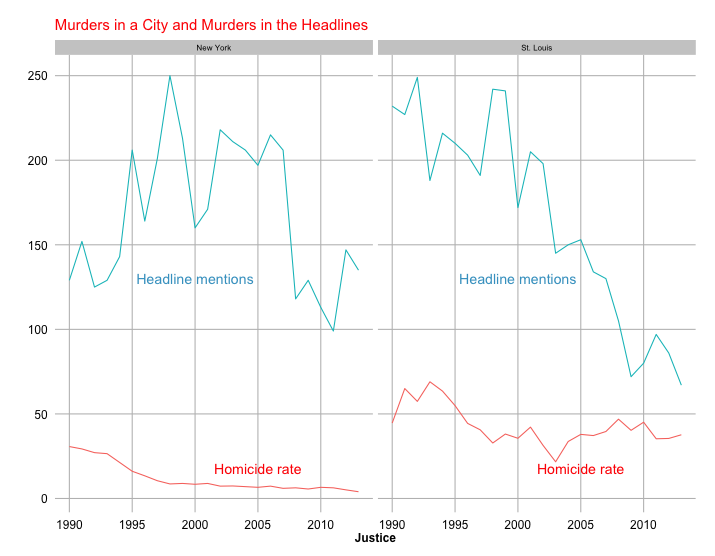 In New York City, for example, homicides are at an all-time low. The homicide rate per 100,000 people was 4 in 2013, compared with 31 in 1990. Headline mentions of murder in The New York Times per year have bounced around a lot but don’t show the same steady, downward trend as homicides themselves. There were 129 mentions of “homicide” or “murder” in the Times' headlines in 1990, when the murder rate was at a historical high. There were 135 in 2013.

In St. Louis homicides are down from their early-1990s peak, but the trend has been flat. The city hasn’t seen New York’s dramatic decline, but crime is still down significantly since the 1990s. The homicide rate in 2013 in St. Louis was 38, compared with 45 in 1990. Headline mentions of murder in the St. Louis Post-Dispatch have declined markedly, however. Unlike in New York, murder headlines have declined even more quickly than the homicide rate. In the Post-Dispatch headlines, mentions of “murder” or “homicide” have dipped from 232 in 1990 to just 67 in 2013. Yet despite the drop in headlines mentioning murder, the gruesomeness has not gone away. Case in point: A headline in the St. Louis Dispatch on Dec. 21, 2013, read, “Missing Alton woman was slain and dismembered; 2 men charged with murder,” and a Nov. 14, 2013, headline in the same newspaper read, "St. Louis man convicted of stabbing grandmother to death."

It seems that what the data shows is that despite decreasing murder rates and decreasing attention (at least in some newspapers), the public still believes crime is rampant. This indicates that the public still hasn’t recovered from the years of the crime surge, or, perhaps more accurately, that the sensationalist coverage of isolated crimes has contributed to the public misperception that crime is increasing.

As with the Gallup polls data, the narrative of violent crime—at least in the popular press—doesn’t have much to do with the crime reality. Crime across the nation is at an all-time low. We need to recognize that and embrace effective policies to keep it even lower. Just as with the case of airplane crashes, the public may see the extraordinary event as representative of the norm when it is not.