According to a recent Brennan Center study, the lack of federal judges over the last two decades has overburdened existing judges with unworkable caseloads, delaying justice to millions of Americans who rely on the courts to resolve their disputes. By creating additional judgeships, the Federal Judgeship Act of 2013 would ensure the court has the capacity to fairly and efficiently adjudicate cases.

On S. 1385, Federal Judgeship Act of 2013
Submitted to Senate Judiciary Subcommittee on Bankruptcy and the Courts

The Brennan Center for Justice at NYU School of Law[1] thanks the Subcommittee on Bankruptcy and the Courts for holding this hearing on the Federal Judgeship Act of 2013 (the “Act”).  The Act would play a vital role in ensuring that Americans enjoy meaningful access to justice in the federal courts, and the Brennan Center urges its prompt passage.

Over the past two decades, the federal courts have faced a growing disparity between caseloads and the number of judges on the bench.  These rising judicial workloads burden the administration of justice and harm the individuals and businesses that rely on the courts to protect their rights and resolve their disputes.  The Federal Judgeship Act of 2013 represents an important step in addressing this growing judge gap, ensuring that courts have the capacity to fairly and efficiently adjudicate the cases that appear before them.

The Brennan Center supports the proposed additional judgeships in both the circuit and district courts, which have both seen dramatic increases in their caseloads since the most recent comprehensive judgeship bill was enacted in 1990.  Because there has been extensive attention to the caseload challenges facing the circuit courts, and because we expect that the subcommittee will hear substantial testimony on how the circuit courts are being affected, this testimony focuses on the challenges faced by the federal district courts.  In particular, we submit this testimony to share our research regarding judicial shortages in the district courts, and the impact that these shortages have on access to justice for litigants around the country.  We urge the Subcommittee on Bankruptcy and the Courts to approve the Act without delay and to take all necessary steps to ensure its prompt consideration by the full Judiciary Committee.

I. Breaking with historical patterns, district courts have not had a major increase in the number of judgeships since 1990 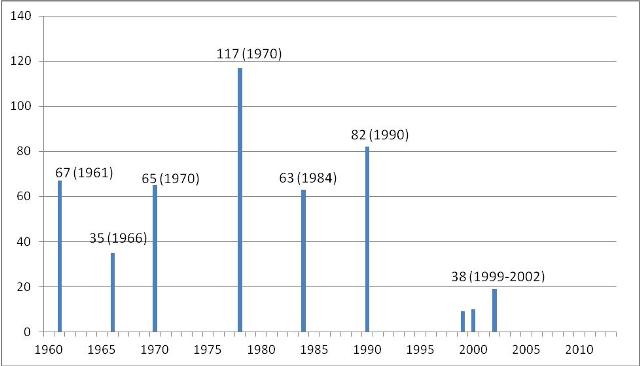 While the creation of new district court judgeships has lagged since 1990, judges’ workloads have increased dramatically, leaving judges with record caseloads in recent years.  Total filed cases in the district courts have increased by 43 percent since 1992, while total “weighted filings,” the number of filed cases weighted by an estimate by the Administrative Office of the U.S. Courts as to how time-consuming they are likely to be, has grown 14.8 percent since 1999 (the earliest year for which comparable data is available).[3]  The total number of pending cases has likewise increased by 40 percent between 1992 and 2013, from 262,805 to 370,067 cases, reflecting a growing backlog.

District court judgeships have not kept pace.  Since 1992, the number of pending cases per authorized judgeship has increased by 35 percent.  Estimates of the workload of all sitting judges – including both active judges and senior judges, who typically work part-time – likewise shows dramatically increasing burdens for judges.  As reflected in Figure 2, the average number of pending cases per sitting judge (defined as active judges plus senior judges counted as half-time because of their reduced workloads) reached an all-time high in 2009.  This figure was higher as of March 31, 2013 than at any point from 1992–2007. 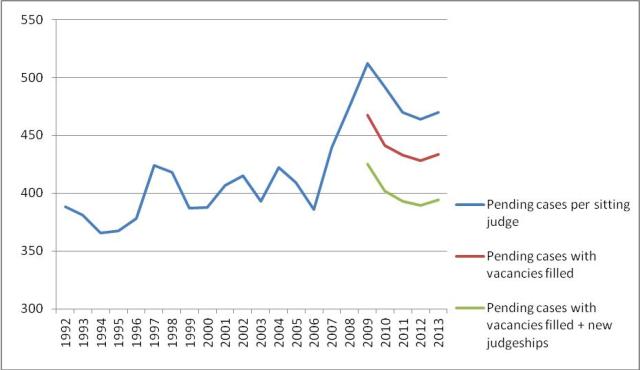 While the current high level of judicial vacancies partially explains this high per-judge burden, even if every existing vacancy were filled, the existing workload per sitting judge would still exceed historical levels, as reflected by the red line in Figure 2.  In contrast, the green line estimates what per-judge caseloads would be if all 2009–2013 vacancies had been filled and Congress had created 85 additional district court judgeships (the number of additional permanent and temporary judgeships proposed in the Act).  As Figure 2 demonstrates, authorizing these additional 85 judgeships is necessary to restore the number of pending cases per sitting judge to the level of the late 1990s.

The growing workload in district courts around the country negatively impacts judges’ ability to effectively dispense justice, particularly in complex and resource-intensive civil cases, where litigants do not enjoy the same “speedy trial” rights as criminal defendants.  For example, the median time for civil cases to go from filing to trial has increased by more than 70 percent since 1992, from 15 months to more than two years (25.7 months).  Older cases are also increasingly clogging district court dockets.  Since 2000, cases that are more than three years old have made up an average of 12 percent of the district court civil docket, compared to an average of 7 percent from 1992–1999.  For a small company in a contract dispute or a family targeted by consumer fraud, these kind of delays often mean financial uncertainty and unfilled plans, putting lives on hold as cases wind through the court system. All too often, justice delayed in these circumstances can mean justice denied.

The federal courts are a linchpin of our democracy, protecting individual rights from government overreach, providing a forum for resolving individual and commercial disputes, and supervising the fair enforcement of criminal laws.  In order for judges to perform their jobs effectively, however, they must have manageable workloads.  The Brennan Center urges Congress to promptly pass the Federal Judgeship Act of 2013, so as to ensure the continued vitality of our federal courts.

[1] The Brennan Center for Justice at NYU School of Law is a nonpartisan law and policy institute that seeks to improve our systems of democracy and justice.  The Center’s Fair Courts Project works to promote fair and impartial courts as a guarantor of equal justice in America’s constitutional democracy.