This post was updated on December 17, 2018. Read our summary of the findings.

In the Trump era, courts frequently appear to be the last line of defense against partisan overreach. But in many states, courts’ vital role in our democracy is under threat.

In our democratic system, judges serve as an independent check on the political branches, not a tool of the legislature or the governor. Courts are required to decide cases regardless of politics or external pressures, and to ensure that the other branches do not overstep their authority or encroach on individual rights.

Yet this year, legislators in at least 18 states considered at least 60 bills that would have diminished the role or independence of the judicial branch, or simply made it harder for judges to do their job — weakening the checks and balances that underlie our democratic system. To identify bills, the Brennan Center reviewed legislation identified by CQ StateTrack, provided by Piper Fund, media reports, and the National Center for State Court’s Gavel to Gavel website.

These bills threatened this balance of power in a variety of ways. Many sought to give the legislature or governor more power over judicial selection, often for partisan advantage; others gave the legislature the power to override court decisions and decide the constitutionality of laws they themselves wrote; still others exerted political, financial, or other pressures on courts to change the outcome of future cases.

In 2017, the Brennan Center documented several trends with respect to legislative assaults on the courts, including 45 bills introduced that year. In 2018, many of those trends continued, while new ones emerged.

In 2018, lawmakers in at least 18 states considered legislation that would have diminished the role or independence of the courts. This included brazen efforts to impeach justices in Pennsylvania and West Virginia, to give the legislature significant new authority over choosing judges in North Carolina, and to limit the state supreme court’s jurisdiction in Kansas: 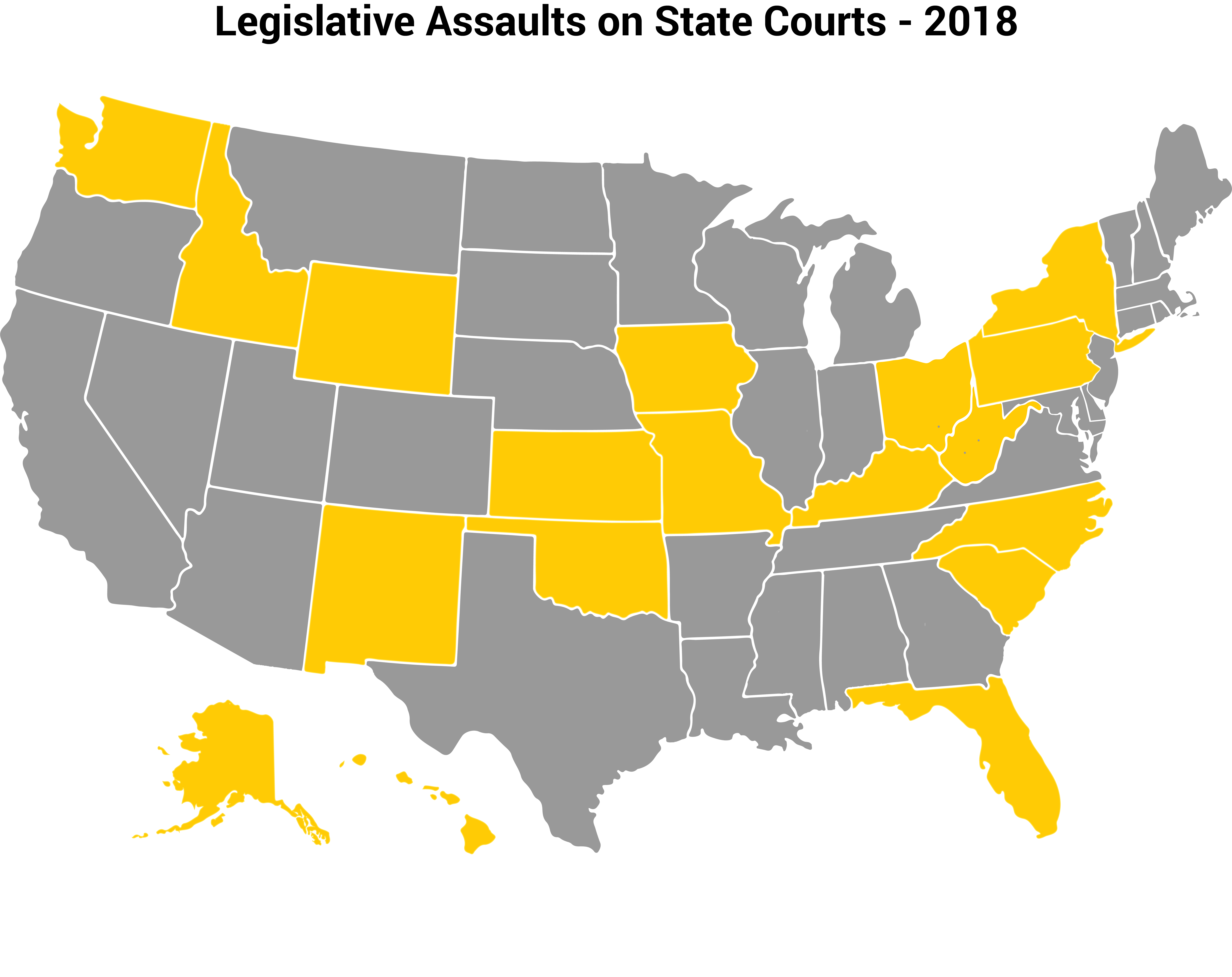 Many of these efforts were concentrated in a handful of states. In two states, North Carolina and Oklahoma, numerous legislative proposals reflect a concerted effort by legislators to gain a partisan advantage in the courts. In North Carolina, these proposals followed Republicans’ loss of the governorship and a conservative majority on the state supreme court in 2016, while retaining a veto-proof legislative majority. In Oklahoma, bills followed high-profile rulings on the death penalty, abortion, and religion that ran against the state’s conservative politics. They continue a trend in the state which saw 15 bills to change how judges are selected in 2016 alone.

In Pennsylvania and Kansas, impeachment and jurisdiction-stripping proposals were introduced in direct response to individual court rulings interpreting the states’ constitutions. In Pennsylvania, the Supreme Court ruled in January that the state’s congressional map was an unconstitutional partisan gerrymander, prompting an impeachment effort. In Kansas, proposals to limit judicial jurisdiction over matters of public education funding came as the legislature faced a court-imposed deadline to fulfil its constitutional obligation to sufficiently fund the public education system.

Finally, in Iowa, a dispute between the Legislature and judiciary over allowing guns in courthouses at least partially fueled a number of proposals.

And, while these states may be the locus of anti-court legislation, legislative threats to courts can be seen across the country. These bills aim to:

Change Judicial Selection Systems: In eight states, 27 bills would have changed how judges are selected. In most cases, the result would have been to inject more politics into the selection process. States use a variety of methods to select judges, but the practices that best preserve judicial independence and integrity are those that insulate judges from the constant political and partisan pressures that other branches face. To this end, many states use nonpartisan judicial nominating commissions to vet and recommend judges for appointment. But a new legislative trend this year would keep those commissions in name while significantly shrinking their role.

Add politics to the selection process

Politicize Judicial Rulings, Discipline, or Court Rules: Seven states considered legislation that would have put undesirable political pressure on judicial decisionmaking. Judges must be able to decide cases without fear of retribution, but some of these bills would increase the likelihood of a judge losing their job for making an unpopular ruling. Other proposals would empower politicians to alter court procedures for reasons other than fair and efficient decisionmaking.

Reduce or Control Court Resources: Three states would have significantly reduced judicial branch resources, or demanded increased control over the judicial branch in exchange for resources. When legislators threaten to cut judicial funding unless judges adhere to the legislature’s wishes, it violates the separation of powers principles that our democracy relies on. And actual losses of funding or resources have forced courts to close or led to case backlogs, making it harder to access justice.

Alter Judicial Term Lengths and Limits: Proposals in three states would have altered judicial terms of office, expediting the removal of sitting judges and increasing the frequency of judicial elections. The shorter a judge’s term length, the greater the pressure that judge will feel to rule with electoral or political, rather than legal, considerations in mind. And, while term limits can be beneficial, judges must be allowed sufficient time to serve and should not be removed from the bench for partisan reasons.

Shield the Legislature from Court Rulings: Proposals in seven states would have made it more difficult, or impossible, for either state or federal courts to rule a legislative act unconstitutional. These bills undermine one of the core responsibilities of state courts, which is to ensure that the two other branches are adhering to the states’ constitution. Two would have put legislators’ interpretation of the United States Constitution above that of the United States Supreme Court.

Change Size of Courts: Court packing and court shrinking, adding or removing seats from a court is another way for legislatures or governors to gain a partisan advantage in their state’s courts. In recent history, Georgia and Arizona added seats to their state supreme courts to do just that. But removing sitting justices from the bench can have a similar impact.

Firearms in Courtrooms: Courts have also been pulled into broader debates about gun rights in public spaces. In addition to the Iowa Legislature’s response to the Chief Justice’s efforts to limit guns in courthouses, at least one state considered a bill that would make it easier to bring guns into courthouses or courtrooms.