The number of Americans with a criminal history has risen sharply over the past three decades. Today, nearly one-third of the adult working age population has a criminal record. In fact, so many Americans have a criminal record that counting them all is nearly impossible.

According to a 2012 Department of Justice survey, state criminal history repositories contain more than 100 million records. These are popularly referred to as “rap sheets” or “criminal records” although most people who have them have never been convicted of a serious crime. These repositories chronicle nearly every arrest, regardless of whether or not it leads to an indictment or conviction. And while 100 million records do exist, this figure almost certainly overstates the true number of individuals who have been arrested at any point in their lives, since one person can have an arrest record in multiple states.

In an effort to make complete criminal histories easily accessible to all law enforcement agencies, the FBI maintains a database indexing these records known as the Interstate Identification Index (III). Whenever a suspected criminal is arrested and fingerprinted by a local, state, or federal law enforcement agency; those records are forwarded to the FBI to be included in the III. The FBI assigns each subject a unique identification number that indexes all state records existing for that person, meaning each number corresponds to a distinct individual.

The Numbers in Perspective:

Nearly half of black males and almost 40 percent of white males are arrested by the age 23.

If all arrested Americans were a nation, they would be the world’s 18th largest. Larger than Canada. Larger than France. More than three times the size of Australia.

The number of Americans with criminal records today is larger than the entire U.S. population in 1900.

Large Groups of People In America

The Biggest Club No One Wants to Join

Regardless of race or gender, researchers estimate that by age 23 nearly one in three Americans will have been arrested.

The figure below shows how arrest rate patterns have changed between the 1960s and the 2000s. The blue diamonds represent estimates of the cumulative probability of having been arrested by the age on the horizontal axis in 1965 and red squares represent the corresponding 2012 estimates. While the probability of a person being arrested by age 16 is roughly the same today as it was 50 years ago, by age 19 the probabilities begin to significantly diverge. As a result, a young adult today is 36 percent more likely to be arrested than their parents’ 1960s cohort. 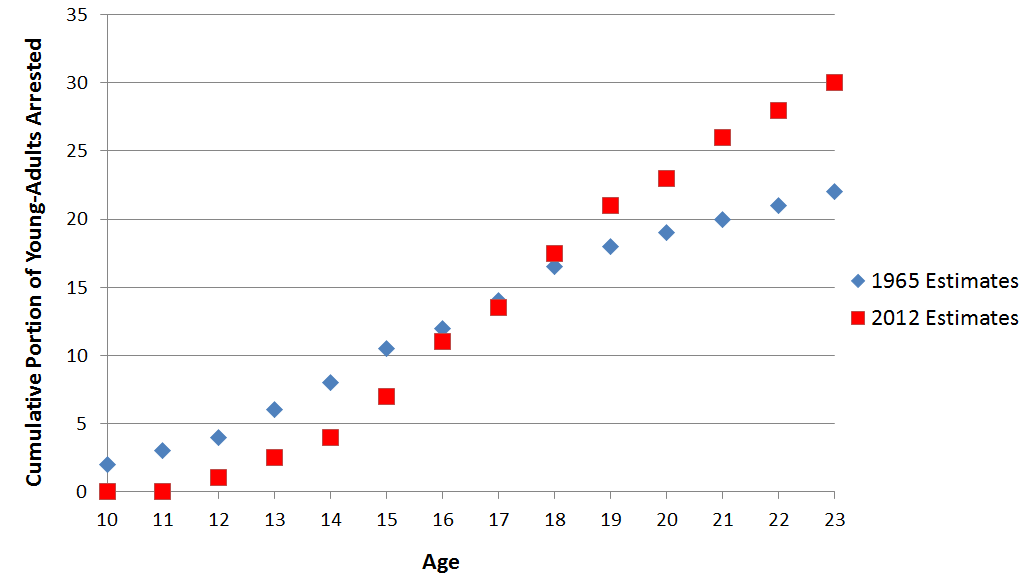 Every Arrest Comes With a Sentence, Guilty or Not

A 2012 survey by the Society for Human Resource Management, found that 86 percent of employers use criminal background checks on at least some candidates, with the majority (69 percent) checking all candidates. In a similar 2010 survey by the same group, 31 percent of respondents said an arrest without conviction would at least be “somewhat influential” in their hiring decision.

Before a background check is run, job applications often ask potential employees if they’ve “ever been arrested for a serious crime?” Not convicted, just arrested. It would not be unreasonable to assume that checking that box would dramatically reduce the chances of being considered. At some point, a job-seeker with an arrest record might just stop asking for applications altogether, resigning to the uncertain future of the informal labor market — more willing to suffer through financial insecurity than the embarrassment of continued rejection.

Of course, convictions are even worse for job applicants. A 2009 Justice Department study found that a past criminal conviction of any sort reduced the likelihood of a job offer by 50 percent. Moreover, the negative effect of having a conviction in their criminal history was found to be twice as large for black job-seekers as compared to their white counterparts. Clearly there is a significant stigma attached to a criminal conviction, but the overwhelming majority of Americans with a criminal history were never convicted of a serious crime; many were not even formally charged with one.

The Atlantic recently ran a sponsored feature titled “What We Don’t Mention About Unemployment: Seventy million Americans with criminal records are barred — by law or stigma — from contributing to the economy.” That would be very troubling if it were true, but it is not.

The truth is that if an arrest universally disqualified a person from employment our economy would implode. Instead, a criminal record doesn’t disqualify a candidate categorically; it just limits a candidate’s ability to attain certain positions that may be the best match for their skillset. For one to be outright disqualified a felony conviction is typically required and even then this sanction is reserved predominantly for licensed fields. Sometimes this makes good sense (security guards, nurses, bank employees), while other times it does not (barbers or cosmetologists).

Employers are justified in wanting to hire trustworthy, responsible workers. But with so many people with criminal records, it stands to reason that valuable potential employees are being overlooked. According to the Society of Human Resource Management survey, more than half of employers (52 percent) said their primary reason for checking candidates’ backgrounds was to reduce legal liability rather than to ensure a safe work environment (49 percent) or to assess trustworthiness (17 percent). These concerns lead employers to pass over qualified employees for less competent ones. Likewise, weary workers with arrest records may gravitate toward occupations that are less selective, ending up in jobs that may not ask about past arrests, but that often pay less and are a poorer match for their skills.

According to Profs. Alfred Blumstein and Kiminori Nakamura, this is an unnecessary loss for both parties. These researchers set out to learn whether it is possible to determine empirically when it is no longer necessary for an employer to be concerned about a criminal offense in a prospective employee’s past. They looked at 88,000 first-time arrestees in New York State and followed them for the next 25 years to see whether they had committed any other crimes. Their results make intuitive sense: after a sufficient amount of time following a prior offense passes without new charges, ex-offenders are no more likely to be arrested than the average citizen. At that point, asking about criminal records serves little purpose. For those who commit their first crime at a young age or whose first crime is a serious offense, it takes about eight years without another offense to “redeem” themselves. For others, such as those who commit non-serious crimes, it can take as little as three years.

Legislators and private sector employers are recognizing the futility of chasing ghosts in prospective employees’ pasts and are beginning to adopt common-sense reforms. Seven states have adopted “fair chance” or “ban the box” laws that bar a private employer from asking about a conviction history on a job application and delay the background check until later in the hiring process.

These laws recognize that discriminating on the basis of an arrest record makes little sense. Some thoughtful employers are already taking independent action. Earlier this year Koch Industries, which employs more than 60,000, removed questions about prior criminal convictions from their job applications. Just this month President Obama signed an executive order to ban the box for federal employment applications, an action suggested by the Brennan Center in 2014. Clearly, this initiative has gained powerful support and that is a positive development for job-seekers with a criminal history.

But even a universal ban will not stop employers who wish to discriminate against candidates with criminal histories. There is no shortage of third party sources stockpiling booking photos, police reports, and all manner of public records for the curious. Trying to prevent the dissemination of information is, though of noble intent in this instance, a losing battle. Instead, we should let individuals reclaim their personal narratives.

If asking about a conviction from a decade ago almost never does anyone any good, certainly there is even less impetus to ask about an arrest from long ago. Especially given that tens of millions of Americans with arrest records were never convicted of a crime. Lawmakers should explore the implications of a uniform policy that drops arrests not accompanied by subsequent charges and wipes a record clean after a sufficient period of time (or in the case of ex-convicts, desistence from crime), which would be a pivotal step in reforming our criminal justice system. Given their role in promoting public-safety it sends a strong signal to the general public about the relevance of a prior bad act when law enforcement officials seal or expunge the associated criminal record.

Currently, there is no statute generally allowing federal criminal record expungements, and at the state level the issue is regulated by a dizzying patchwork of laws. These laws vary from state to state in the offenses they cover, as well as the process for seeking expungement, and navigating them is often difficult, time-consuming and expensive. Efforts are being made to clear these roadblocks. In March, Sens. Rand Paul (R-KY) and Cory Booker (D-NJ) introduced the REDEEM Act, which would allow some nonviolent criminal and juvenile offenses to be sealed or expunged. Just this month the White House announced the establishment of a National Clean Slate Clearinghouse, a partnership between the Departments of Labor and Justice to help with record-cleaning and expungement.

It is unclear whether either of these efforts will ultimately reach fruition, but at the very least they indicate that politicians from both sides of the aisle are ready to address criminal justice reform. It is time for their colleagues to similarly recognize broad social and economic benefits associated with a future wherein 70 million Americans aren’t shackled to the mistakes of their distant pasts.