Partisan gerrymandering takes center stage in Wisconsin as a four-day trial begins today in Whitford v. Nichol. The plaintiffs, 12 Wisconsin residents who historically have voted Democratic, argue that the legislative district plan drawn after the 2010 Census is unconstitutional because it discriminates against Democratic candidates and voters on the basis of their political beliefs.

Partisan gerrymandering has consistently tripped up courts in the past, including the U.S. Supreme Court. In Davis v. Bandemer in 1986, the Supreme Court recognized the issue as one within the power of courts to decide. But in the three decades since, they have struggled mightily to find a manageable standard to determine when a district plan crosses the line between permissible redistricting and unconstitutional gerrymandering.

When the Supreme Court last took up the issue, in Vieth v. Jubelirer in 2004 and LULAC v. Perry in 2006, it split badly: some justices declared partisan gerrymandering off limits for courts to decide, others proposed various tests to determine when gerrymandering had occurred, and one (Justice Anthony Kennedy) sat in the middle. As a result, the issue was left unsettled and remained largely dormant until now.

Not surprisingly, many in the reform community are watching the Whitford trial closely. The case is the first time in nearly three decades that partisan gerrymandering claims have survived a motion to dismiss in a trial court, and it will be a critical test for a proposed standard for evaluating partisan gerrymandering claims called the efficiency gap.

At the trial, the three-judge panel will face two major issues. The first is a question of intent — were Wisconsin’s state House districts intentionally drawn to discriminate against Democrats? If the court finds there was discriminatory partisan intent, the judges will then need to determine whether it resulted in a discriminatory effect that crosses into unconstitutionality.

When it comes to intent, the plaintiffs say evidence is abundant. They start with the fact that Republican architects of the redistricting plan were obsessed with secrecy, meeting in a map room at a law firm in Madison, the state’s capital, that could only be accessed by a handful of Republican Party leaders and operatives. Democratic lawmakers, in fact, were entirely excluded from the process. While nearly every Republican legislator had a chance to review and offer comments about his or her district, not a single Democrat was consulted.

The plaintiffs also point out that the Republican mapdrawers were acutely tuned into the partisan impacts that map changes could have. They analyzed the maps they drafted to see how Republican candidates would fare under them, and worked with painstaking detail to create a map that maximized the number of Republican-held districts. In fact, at one meeting of Republican legislators, a member of the Senate majority leader’s staff said, “The maps we pass will determine who’s here 10 years from now,” before adding, “We have an opportunity and an obligation to draw these maps that Republicans haven’t had in decades.”

Creating the ultimate Republican map also required upending a longstanding rule that had governed Wisconsin redistricting for a century. Typically, municipalities drew ward boundaries following the Census, and then congressional and state legislative districts were drawn around the wards. The Republican mapdrawers, however, reversed this relationship, forcing municipalities to shape wards around the already-redrawn congressional and legislative districts.

Once the Republicans finished drawing the redistricting plan, they pushed it through the legislature in just eight days, leaving Democrats little time for debate. The plaintiffs cite the Republicans’ aggressive “legislative agenda” as yet further evidence that they intended to discriminate against Democrats.

The three defendants — all officials of the Wisconsin Government Accountability Board — don’t dispute the factual claims. Instead, they argue that “it is well established that partisan intent in districting is lawful” and that the Wisconsin mapdrawers acted within the bounds of normal partisan redistricting. According to the defendants, it is therefore “not illegal or even shocking” that the districts were drawn as they were.

Measuring the Impact of Gerrymandering: The Efficiency Gap

The plaintiffs also say the evidence of the impact of gerrymandering is clear. Relying on a statistical measurement known as the efficiency gap, they say the maps were so effectively drawn it would be hard for Democrats ever to win a majority. As the chart below shows, the efficiency gap of the final plan chosen by the Republican mapdrawers was the highest of all the draft plans, and was much higher than the efficiency gap than the 2000 map. 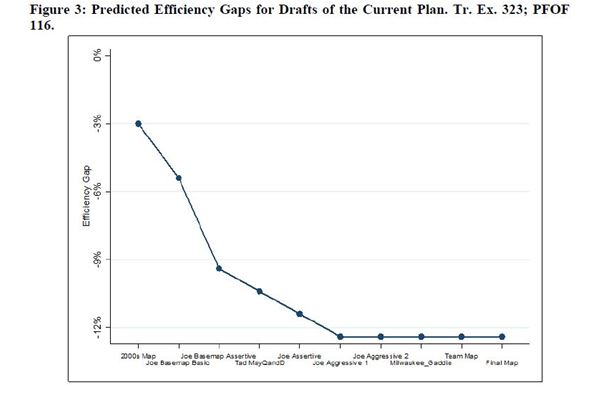 The efficiency gap, which was developed by Nicholas Stephanopoulos of the University of Chicago Law School and Eric McGhee of the Public Policy Institute of California, essentially measures the number of votes each party wastes in an election. A wasted vote is one that is either cast for a losing candidate or for a winning candidate in excess of what was needed to win the election (i.e. above 50 percent). By comparing each party’s wasted votes to the total votes cast, the efficiency gap shows whether either party enjoyed a systematic advantage over the other. In other words, the efficiency gap captures in one simple number “all of the packing and cracking decisions that go into a district plan” to determine the severity and strength of a gerrymander.

Furthermore, they claim the state has no justification for such high efficiency gaps. Citing research from University of Michigan political scientist Jowei Chen, the plaintiffs argue the state could have achieved all of its legitimate redistricting goals while drawing a map with a much lower efficiency gap. Indeed, to prove that the pro-Republican gerrymander was far from inevitable, a Democratic legislator submitted an alternative map that performed similarly to the Republican’s plan in terms of traditional redistricting criteria, but had a significant pro-Democratic efficiency gap.

Not surprisingly, Wisconsin rejects the use of the efficiency gap as unfounded in precedent. It claims that the test, in fact, is actually “more radical” than other standards the courts have rejected before. But like those standards, they argue, the efficiency gap suffers from the same fundamental defect — it is “based on a principle … that is not found in the Constitution.”

Partisan gerrymandering has long befuddled courts and frustrated American voters. It is a regrettably time-honored tradition in American politics that has been used by both major parties.

But with the Wisconsin case having gotten farther than any partisan gerrymandering challenge in more than three decades, it looks possible that courts could be finally ready to step into the political thicket — and set up a major showdown on the issue at the Supreme Court ahead of the next round of redistricting after the 2020 Census. So for this week, all eyes on Wisconsin.