Over 100 million Americans will cast a ballot this November, amid the biggest voting rights rollback since Jim Crow. Here’s what we can do to fix that.

This year is one of the most important elections in recent history. More than 100 million Americans will cast a ballot in November. Yet many voters continue to face obstacles to the ballot box.

In 2016, 16 states have restrictive voting rules in place for the first time in a presidential election. This is part of the biggest voting rights rollback since the Jim Crow era.

The primaries have already seen higher-than-average turnout — and real voting problems in places like Arizona. But the real concern is how many could be impacted in November.

To make matters worse, states with higher African American turnout and larger Hispanic population growth were more likely to pass voting restrictions in the first place. Many of these restrictions were implemented after the Supreme Court gutted the Voting Rights Act in 2013, which previously required certain jurisdictions to gain prior approval before changing voting rules that could affect minorities.

Instead of making it harder to vote, we should ensure every eligible American is able to cast a ballot that counts this November.

Along with craigconnects, we polled 1,006 adults about their perception of voting in America. We found some surprising statistics —  most importantly, that 69 percent want to see voting reforms.

So what can we do? 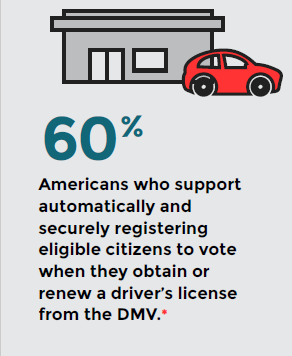 By automatically and securely registering every eligible citizen, the United States could add up to 50 million new voters nationwide, increase the accuracy of our rolls, cut costs, and curb the potential for fraud.

Legislators on both sides of the aisle have supported automatic registration bills, and 60 percent of Americans support the proposal.

Here’s how it works: When eligible voters interact with the DMV, they are automatically and securely added to the voter rolls.

Every voter would be given a chance to opt out (no one would be registered against their will). Since Oregon implemented automatic registration earlier this year, their voter registration rate has quadrupled.

You can join us and tell Congress it’s time for automatic registration nationwide.

By modernizing our voting system, we can ensure that our democracy works the way our Founders intended — an equal vote, and voice, for every citizen.