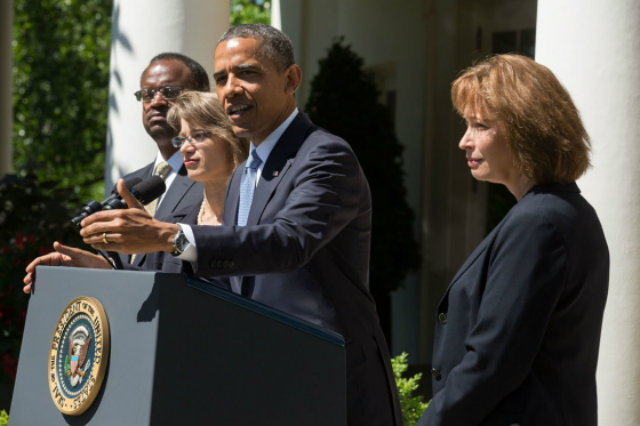 No less than 43 Senate Republicans Thursday afternoon used a filibuster to block the judicial nomination of Patricia Ann Millett for a spot on the D.C. Circuit Court of Appeals, the most important federal court short of the United States Supreme Court. Thirty-seven did so directly, three by voting “present” and three by simply not voting at all. And so another eminently-qualified candidate for public office, a legal expert willing to make a great financial sacrifice to serve her country, has been rejected for reasons everyone agrees have nothing at all to do with her substantive qualifications for the job.

Who, exactly, is Patricia Ann Millett? All you need to know comes from this headline, from an organization devoted to military spouse attorneys: “Faith and Family at the Core of Military Spouse DC Circuit Nominee Patricia Millett.” Got that? The Republicans in the Senate just filibustered the nomination of a highly-talented lawyer and hard-working woman of faith who is married to a member of our armed forces. In doing so, by defeating today’s cloture vote, they prevented this nominee from re-joining the federal government even though Millett received enough votes to pass a straight-majority vote for her post.

This is self-destructive politics at its worst—and precisely the sort of nihilism we just saw with the aborted government shutdown over Obamacare. There, the GOP shut down the entire government because it does not have the votes to repeal the Affordable Care Act. Here, because Republicans do not have enough votes in the Senate to statutorily decrease the size of the D.C. Circuit, they have resorted instead to effectively reducing the size of it by blocking the nominations of worthy candidates like Millett and Caitlan Halligan. And they have done so by making the patently frivolous argument that the understaffed appeals court, the feeder court to the Supreme Court, doesn’t need more judges.