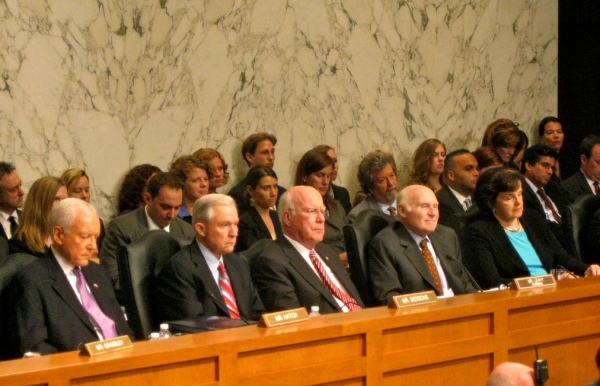 When Bureau of Prisons Director Charles Samuels came to Capitol Hill Wednesday morning for an “oversight” hearing about the nation’s overcrowded prisons it seemed the primary topic members of the Senate Judiciary Committee wanted to discuss with him was Congress’ renewed (and very much welcome) interest in reforming the nation’s mandatory minimum sentencing laws. The relentless stories of the great injustices wrought by those rules did not ease Congress from its torpor; it was the soaring BOP budget, the unsustainable cost of the nation’s prison population, which did it.

So, over and over again Wednesday, in both their speeches and their questions, the senators raised the issue. Judiciary Chairman Patrick Leahy, the Democrat from Vermont, got to the topic in the third paragraph of his prepared remarks. Sen. Sheldon Whitehouse, the Democrat from Rhode Island who presided over the hearing, also raised the issue. No surprise there. There is now pending before Congress a smart piece of bipartisan legislation titled the “Justice Safety Valve Act of 2013, itself the subject of a Congressional hearing in September, that would wisely restore sentencing discretion to those public officials most qualified to exercise it: federal trial judges.

Congress is not alone in paying more attention to the runaway destruction caused by these inflexible rules. The Justice Department, led by Attorney General Eric Holder, this summer implemented important reforms designed to ease prison overcrowding by changing the way prosecutors draft indictments, by easing standards for “compassionate release” for elderly and ill drug offenders, and by encouraging drug-treatment programs in lieu of prosecutions. These all make sense. But they do not address another critical component of the problem—the relentless push by federal prosecutors to cajole drug suspects into taking plea deals.

It is a terribly sore subject with many of the nation’s federal trial judges, who see these tactics by Justice Department lawyers as antithetical to the constitutional right to trial. The federal courts tried fewer cases in 2002 than they had in 1962 even though the number of criminal cases filed during that time more than doubled. U.S. District Judge William Young of Massachusetts, for example, the jurist who famously sentenced would-be shoe-bomber Richard Reid in 2003, has long been a critic of the practice and believes it may even be an unconstitutional intrusion upon a defendant’s jury trial right. And now another federal judge, another notable federal judge, has added his voice to the chorus.

U.S. District Judge John Gleeson, a former federal prosecutor with a long resume of success, a respected judge who has long chronicled the perversions of the current sentencing scheme, last month issued an instant-classic opinion on the topic in a case styled United States v. Kupa. Here is the link to the ruling. If you want to understand how federal prosecutors abuse current mandatory minimum standards, how common practice and policy generates both injustice to individuals and unsustainable financial burdens for the rest of us, do yourself a favor this weekend and read it. It is a shocking indictment of, well, the way government lawyers indict people. Here from the opinion are just two clarifying paragraphs:

To coerce guilty pleas, and sometimes to coerce cooperation as well, prosecutors routinely threaten ultra-harsh, enhanced mandatory sentences that no one – not even the prosecutors themselves – thinks are appropriate. And to demonstrate to defendants generally that those threats are sincere, prosecutors insist on the imposition of the unjust punishments when the threatened defendants refuse to plead guilty

Prior felony informations don’t just tinker with sentencing outcomes; by doubling mandatory minimums and sometimes mandating life in prison, they produce the sentencing equivalent of a two-by-four to the forehead. The government’s use of them coerces guilty pleas and produces sentences so excessively severe they take your breath away. Prior felony informations have played a key role in helping to place the federal criminal trial on the endangered species list.

As a matter of policy and practice this is unacceptable. It also is unacceptable that, nearly a month after Judge Gleeson issued his ruling, the Justice Department still has not responded to it either by ending the practice the judge describes or by publicly justifying that practice. Alas, it’s too bad that Leahy and Company held their hearing on the topic a few weeks before Judge Gleeson issued his ruling in Kupa. He would have made an excellent witness to the injustice that still exists here and the desperate need for further reform in this area. He also would have served as an important reminder that the Justice Safety Valve Act of 2013, while necessary and appropriate, still won’t solve all of the problems our current sentencing regime imposes upon the American people.