With control of the Senate at play in the 2014 election, tight races have seen astronomical spending from outside groups. Even with almost three months left until Election Day, an analysis of outside spending in the nine most competitive Senate races found several trends. Like previous Brennan Center analyses, we observed inadequate transparency and single-candidate spenders providing opportunities to avoid contribution limits. We also discovered two key findings:

Below are more detailed findings from our analysis of Federal Election Commission data. As with any calculations based on FEC data, these figures underestimate actual spending levels because “issue ad” spending is not required to be reported. [1] 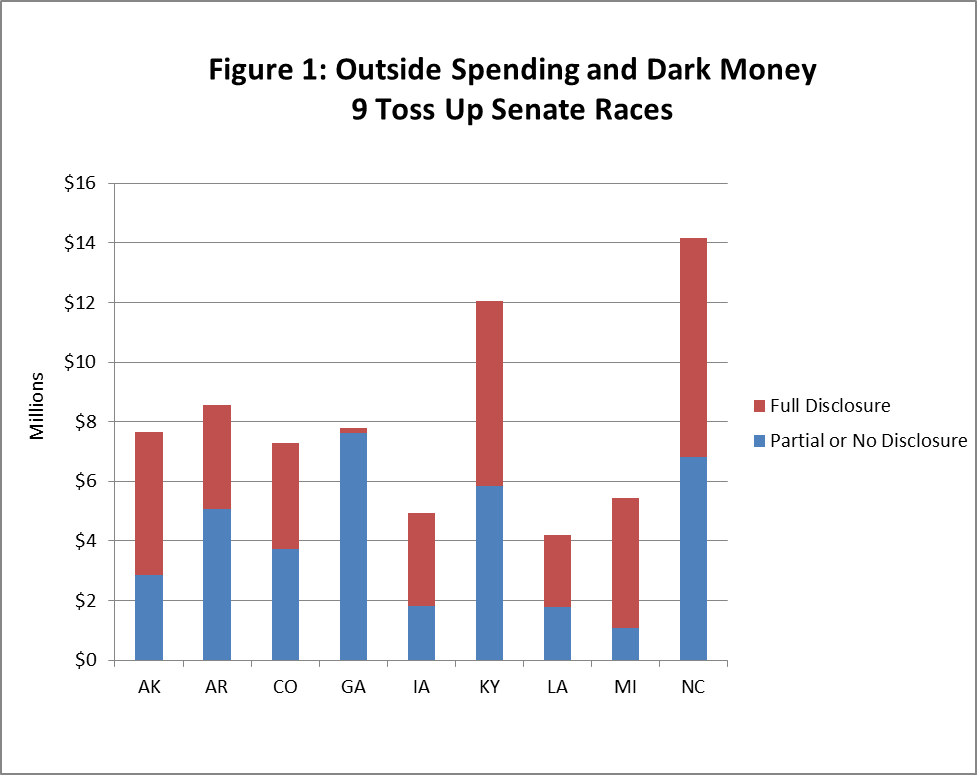 Across all nine toss-up races, independent spending totaled $72 million through August 11, ranging from a high of $14 million in North Carolina to a low of $4.2 million in Louisiana. By way of comparison, non-party independent spending for the entire 2012 Senate election in all 33 contests reached $259 million. During the last midterms in 2010 it reached only $97 million for 37 contests.

The largest spender in our sample by far was the Democrat-aligned Senate Majority PAC, which spent $21 million in the nine contests. The U.S. Chamber of Commerce, supporting Republicans, came in a distant second at $6.7 million. The rest of the top five consisted of the liberal Patriot Majority USA and two single-candidate groups, Put Alaska First and the Kentucky Opportunity Coalition. Of these five top spenders, only Senate Majority PAC and Put Alaska First disclose all of their donors.

Overall, 51 percent of the $72 million in reported outside spending in the nine most competitive senate races came from dark money groups that do not fully disclose their donors. The portion of dark money varied across the nine races, from a low of 25 percent in Michigan to a high of 98 percent in Georgia. All of these percentages are likely to underestimate the true dominance of dark money, as the section below on unreported spending illustrates.

The amount of dark money in elections is increasing dramatically: As of last month, across all federal elections, 2014 had seen 15 times more than in the 2010 midterms, and three times the level of 2012. To take the long view, before 2008 — when there was $69 million in spending by groups that disclose none of their donors in all federal elections — dark money was virtually nonexistent. Focusing on the Senate, according to the Sunlight Foundation, there was $97 million worth of dark money across all senate elections in 2012. With three months to go, our sample of just nine races has already seen $37 million. 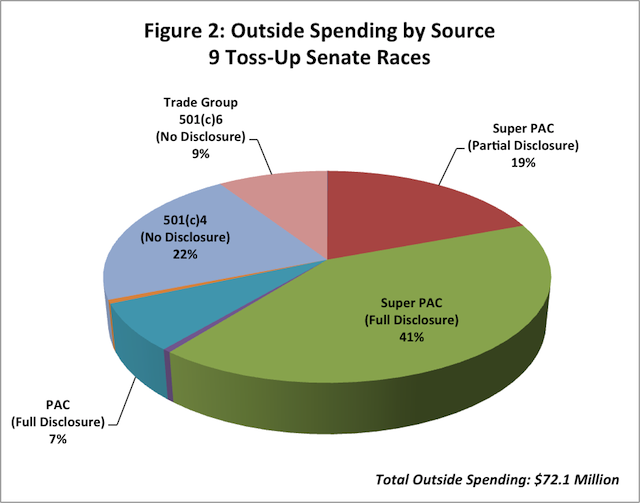 The race with the greatest share of single-candidate super PAC spending is in Alaska, where 65 percent of independent spending comes from groups dedicated to one candidate. Democratic incumbent Mark Begich has two single-candidate groups in his corner, one of which has already spent $4.3 million. His opponent, former state attorney general Dan Sullivan, is also supported by a candidate-specific super PAC, although its spending is dwarfed by pro-Begich expenditures.

The largest single-candidate spender is a super PAC called Put Alaska First, which receives most of is money from Senate Majority PAC, a national super PAC dedicated to holding the Democratic majority in the Senate. Put Alaska First has also accepted sizeable corporate contributions, including money from a Washington state LLC connected to the fishing industry and a casino in California. Corporations are prohibited from contributing directly to candidates.

Another super PAC created solely to aid Begich, Alaska SalmonPAC, was formed at the end of May and has spent $380,000 already. The group was formed by and has only reported contributions from Alaska Conservation Voters, a social welfare nonprofit focused on environmental issues. Alaska Conservation Voters does not report its donors, other than a list of three “top contributors” on its website. This gives SalmonPAC the distinction of being both a candidate-specific super PAC and a dark money group. Alaska Conservation Voters announced a “six figure” pro-Begich ad campaign in April. Since those ads ask viewers to “thank Senator Begich for protecting Alaska jobs” rather than to vote for him, the expenditures are not reported to the FEC and are not included in our analysis. SalmonPAC plans to spend $1.1 million on direct mail and voter contact in addition to the unknown amount its affiliate is spending on ads.

On Sullivan’s side, a super PAC called Alaska’s Energy / America’s Values has spent $275,000 supporting the Republican. The group is run by an Anchorage political consultant, Art Hackney, who has long known Sullivan and reportedly convinced him to run in the first place. Sullivan’s father and brother have given generously to the super PAC. One of the top donors to Alaska’s Energy, a longtime board member of the family business in Ohio, gave the maximum contribution of $5,200 to Sullivan’s campaign two weeks before giving $50,000 to the super PAC. Two $10,000 donors to Alaska’s Energy also maxed out with their contributions directly to Sullivan.

In Kentucky, all the single-candidate-group spending — $6.7 million, or 56 percent of the outside expenditures — has come from two groups that favor Senate Minority Leader Mitch McConnell. One is a super PAC, Kentuckians for Strong Leadership, and the other is a dark money nonprofit, Kentucky Opportunity Coalition. The two organizations have the same treasurer, who also works for American Crossroads, one of the biggest outside money groups of the 2012 elections. Crossroads’ president, Steven Law, was a closely trusted aide of McConnell’s for years. Kentuckians for Strong Leadership was founded and is advised by a former McConnell campaign aide, Scott Jennings.

Last April, the super PAC received $250,000 from a single donor, venture capitalist Lawrence DeGeorge of Jupiter, Florida, who also gave the maximum $5,200 directly to McConnell’s campaign. Kentuckians for Strong Leadership has collected six-figure donations from a handful of other individuals who maxed out to McConnell.

But the nonprofit Kentucky Opportunity Coalition is the bigger spender, accounting for $4.2 million of the $12 million worth of outside spending in the race. And because this social welfare group does not disclose its donors, we have no way of knowing whether its revenue includes “double-dipping” donors who have hit the contribution limit with contributions to McConnell — or whether its contributors include special interests seeking to curry favor with one of the most powerful people in Washington.

On his way to the Republican nomination, businessman David Perdue benefited from a single-candidate super PAC attacking his strongest opponent, U.S. Rep. Jack Kingston. That group, Citizens for a Working America, received the vast majority of its funds from two Ohio-based nonprofits and spent $2.2 million in the primary. Citizens for a Working America is funded almost entirely by two Ohio nonprofits. Neither of those groups report their donors, but as extensively investigated by the Center for Responsive Politics, both are connected to political consultant Nick Ayers, who also worked for Perdue’s campaign. Ayers has said that a firewall prevented his dual roles from resulting in any illegal coordination between the campaign and the outside groups. (One of the Ohio nonprofits is also the main contributor to a dark-money super PAC that has only made expenditures in favor of Arkansas Republican challenger Tom Cotton this cycle, to the tune of $1 million, although it has spent to help other candidates in the past.)

As always, the totals reported in this analysis reflect what is disclosed to the FEC and do not include spending on issue ads. Ads that don’t explicitly call for a vote for or against a candidate are not required to be reported unless they air shortly before an election. These sham issue ads are often indistinguishable from campaign ads, however.

In addition to the already jaw-dropping amount of reported outside spending in North Carolina — $14 million — dark money groups are furiously spending on issue ads that aren’t reported to the FEC. The conservative dark money heavyweight Americans for Prosperity alone has reportedly spent $8.9 million. The Republican-allied Crossroads GPS has racked up $3.6 million. Generation Opportunity, a conservative groups focused on the youth vote, added $800,000 of its own spending. All three groups have been relentlessly attacking Democratic incumbent Kay Hagan. In Hagan’s corner, the League of Conservation Voters spent $845,000 hitting State Speaker Thom Tillis.

That’s more than $14 million in unreported spending in the Tar Heel State; adding it to the reported total would yield $28 million in outside spending in just one senate race. Therefore, although FEC data indicates that slightly less than half of the outside spending in North Carolina is dark money, in reality the sources of the vast majority of independent spending are hidden from public view.

Colorado has also seen massive unreported spending. This spring, Americans for Prosperity spent $1 million on a single three-week ad buy criticizing Obamacare and connecting the incumbent Democrat, Mark Udall, to the law. AFP released another ad a few weeks later, and another this month. Generation Opportunity, a conservative group dedicated to swaying young voters, spent $900,000 attacking Udall in June. The American Energy Alliance spent $400,000 to attack Udall about the Keystone pipeline. Crossroads GPS will have reportedly spent $2.3 million in Colorado by the end of this month. Udall also has been targeted by at least $200,000 unreported spending from the American Petroleum Institute.

The Colorado ad buys with announced costs add up to $4.8 million, and the other ad buys announced but not priced certainly bring the total well past $5 million — possibly much higher. With total reported outside spending in the Colorado race at $7.3 million, unreported dark money spending accounts for a huge slice of the pie.

Americans for Prosperity and Crossroads GPS have spent millions in other races in our sample, as well. We only know about their spending because they trumpet it in press releases. Other groups may be making significant expenditures without fanfare. There is unfortunately no way of knowing how much spending is happening in this category of doubly dark money, where neither the contributions nor the expenditures are required to be disclosed.

As partisans and special interests vie for control of the Senate, outside spending is soaring in tight races. It is likely to increase dramatically as Election Day approaches. Reported dark-money spending in these nine contests totals $37 million, and there has been tens of millions of dollars more that is unreported. Single-candidate groups spent $15.5 million across the nine races, although the spending was largely concentrated in just three. These groups offer an end-run around contribution limits, and the emerging practice of candidate-specific groups not disclosing their donors leaves voters unable to adequately weigh the reliability of the messages they’re bombarded with and the public unable to track which interests are spending to threaten or curry favor with the elected officials of the next Congress.