Gerrymandering is an unfortunate American tradition, resulting in seemingly endless litigation attempting to undo legislative overreach. This decade is no different. More than half way into the decade, maps are unsettled in more than half a dozen states. 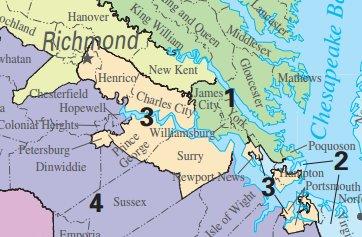 Virginia. On Monday, the Supreme Court will hear arguments in Wittman v. Personhuballah, which will decide whether Virginia Republicans committed a racial gerrymander when they drew Virginia’s 3rd Congressional District in early 2012. At the time, African-Americans groups argued in favor of proposals that would have created a second African-American controlled congressional district in the state.

A three-judge federal panel has since struck down the 3rd District twice as an unconstitutional racial gerrymander. With elections coming up, the court adopted a replacement map earlier this year that unpacked the 3rd District and converted the 4th District into a seat where African-American voters are a substantial political force, if shy of a majority.

Although the State of Virginia is no longer defending the 2012 map, members of Virginia’s Republican congressional delegation stepped in and are arguing that the Supreme Court should restore the earlier map.

As in much of the South this cycle, the crux of the congressional delegation’s defense is the argument that politics — a desire to maximize the number of Republican seats – rather than race was behind the decision to pack African-American voters into one district.

North Carolina. As in Virginia, race and politics in North Carolina are intermingled in Harris v. McCrory, where a three-judge federal panel could rule this week on whether to approve a congressional map passed by that state’s legislature to replace a 2011 map found to be unconstitutional.

Allegations of racial gerrymandering also are at the heart of the North Carolina case, with challengers saying Republican lawmakers unconstitutionally packed African-American voters into the state’s 1st and 12th Congressional Districts. In early February, the three-judge court agreed and struck down the 2011 map.

After the ruling, the North Carolina legislature held an emergency special session where it redrew the map. However, in redrawing maps, legislative leaders adopted rules that provided that no proposed map could be considered unless it maintained the state’s current partisan balance of 10 Republican and 3 Democratic seats. Challengers say the result is a replacement map that is doubly defective. They argue that not only did it fail to remedy racial gerrymandering but that it also has created an unconstitutional partisan gerrymander.

The case could potentially bring the question of partisan gerrymandering back to the Supreme Court for the first time in more than a decade. When the high court last considered partisan gerrymandering claims in the mid-2000s, it deadlocked badly on whether such claims could even be brought in court and what the standard was for gauging when an unconstitutional gerrymander had occurred.

Arguments beginning midweek will focus on whether the challengers — who rely on a measure of bias known as the efficiency gap — have stated a legally workable standard for partisan gerrymandering and whether bias in the map results from factors other than partisan intent.

If the three-judge court cannot resolve the issue, the case is set for a full trial in late May.