Less than two months after the Supreme Court punted on partisan gerrymandering, the question is likely headed back to the high court as the result of a Monday trial court decision striking down North Carolina’s 2016 congressional map.

Here’s what you need to know about where things stand.

What is the North Carolina case about?

Although the new map remedied unconstitutional racial gerrymandering, Republican legislative leaders were outspoken that they were “going to use political data in drawing this map” and that the purpose for doing so was “to gain political advantage.” Lawmakers even went so far as to adopt written rules requiring that 10 of 13 districts in any new map be Republican.

The result was a Congressional map that, although it was not drawn with a focus on race, was only marginally less skewed in favor of Republicans than the original map. 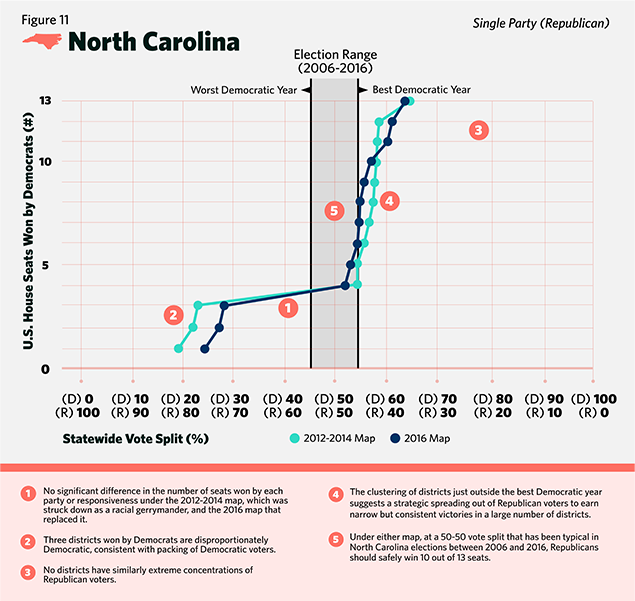 Shortly after adoption of the new map, plaintiffs, including the North Carolina Democratic Party, the League of Women Voters, and Common Cause as well as individual voters, challenged the map in federal court as an unconstitutional partisan gerrymander.

In January 2018, a three-judge panel struck down the map, holding that it violated the First and Fourteenth Amendments as well as Article I of the Constitution. But, on appeal, the Supreme Court sent the case back to the district court with instructions to reconsider the case in light of its ruling in Gill v. Whitford, a partisan gerrymandering case from Wisconsin.

This week’s ruling by the district court affirmed that the plaintiffs had legal standing to bring their claims and again ruled that North Carolina’s congressional map violated the Constitution. The decision also ordered that the maps be redrawn.

Who will redraw the map and when will that take place?

It’s unclear as of this writing, but some clarity may come as soon as next week after the three-judge panel has considered supplemental briefing by the parties.

The normal rule when a map is struck down is for courts to give the legislature at least a short window to adopt a replacement. However, the district court said that the normal rule might not apply in this instance given that this is the second time the North Carolina Legislature has failed to enact a constitutionally compliant congressional map. (The court noted that North Carolina’s legislative plans also have been repeatedly struck down by courts as unconstitutional racial gerrymanders).

The court has asked the parties to submit briefs no later than Friday on who should redraw the map.

In the meantime, the court told the North Carolina Legislature that if it wants to redraw the map, it “should do so as quickly as possible” and set a deadline of 5:00 p.m. September 17 for the Legislature to enact a replacement plan, saying that it would not consider any plan enacted after the deadline.

A ruling on what will be the process for drawing a new congressional map could come as soon as this weekend.

Will the new map be used for the 2018 election?

This is also uncertain now.

Although the 2018 midterm is only 70 days away, the district court left open the possibility that it might order new maps for this November’s election. The court even suggested that one of the demonstration plans created by experts in the case could be put in place to remedy the constitutional defects in the current map.

The court asked the parties to include in the briefs due Friday their positions about whether maps should be changed for the 2018 election or, alternatively, whether the current map should be used for 2018 and a new map drawn for 2020.

What happens next at the Supreme Court?

The expected next step is for the legislative defendants to appeal the ruling to the Supreme Court and ask that the district court’s decision be stayed while the high court considers the appeal.

Under court rules, that stay request will go first to the district court itself and then, assuming, as expected, that the district court denies the request, it will go to the Supreme Court. There, Chief Justice John Roberts, who has responsibility for appeals out of North Carolina, will have the option to grant or deny the request on his own. By custom, however, he will refer it to the entire court, where five votes will be required to grant a stay. Absent a stay, the map redrawing process will go forward.

In the meantime, regardless of whether the Supreme Court grants a stay, it is all but certain that it will agree to hear the case. The most likely time frame for oral argument is in March or April of next year. However, the parties could ask the court to expedite the appeal, making it possible that the matter could be heard in January or February. In any event, barring unforeseen circumstances, a ruling will come by the end of the court’s next term, which ends in June 2019.