Colorado, New Mexico, and Delaware just became the latest states to take a stand against the Electoral College and join the National Popular Vote Interstate Compact (NPV, or the Compact). The NPV is a multi-state agreement that, when active, would ensure that the presidential candidate who wins the popular vote nationally also wins in the Electoral College. With signatures of Governors Jared Polis of Colorado, Michelle Lujan Grisham of New Mexico, and John Carney of Delaware expected, this trio of states will have pledged themselves to the growing nationwide effort.

The states’ approval of the Compact is a victory for democracy and the principle of “one person, one vote.”

However, this does not mean that Colorado, New Mexico, and Delaware will award their collective 17 electoral votes to the biggest national vote-getter in 2020. There’s still more work to be done before we can wave goodbye to the current function of the Electoral College—one of the most fundamentally undemocratic parts of U.S. elections.

Here’s what you need to know about National Popular Vote and the Electoral College:

How does NPV work?

In the current Electoral College system, the presidency is awarded to the candidate who wins at least 270 of the 538 available electoral votes. The Constitution gives state legislatures the right to choose how presidential electors are chosen. Since the 19th century, each state (with the exceptions of Maine and Nebraska) has awarded its electoral votes to the winner of the popular vote in that state. But under the NPV system, states would commit to award their electoral votes to the winner of the national popular vote instead.

The Compact will go into effect only when states controlling at least 270 electoral votes have joined. In the election after that threshold is reached, the NPV states would ensure that the winner of the national popular vote becomes president. While the Compact would not abolish the Electoral College, it would guarantee that the winner of the Electoral College vote and popular vote are the same.

The campaign to pass the Compact began in 2006, earning its first victory in Maryland the following year. Since then, 14 states (Maryland, New Jersey, Illinois, Hawaii, Washington, Massachusetts, Vermont, California, Rhode Island, New York, Connecticut, Colorado, New Mexico, Delaware) and Washington, D.C. have signed on. The addition of these three new states brings the number of pledged electoral votes to 189, 70 percent of the needed total. 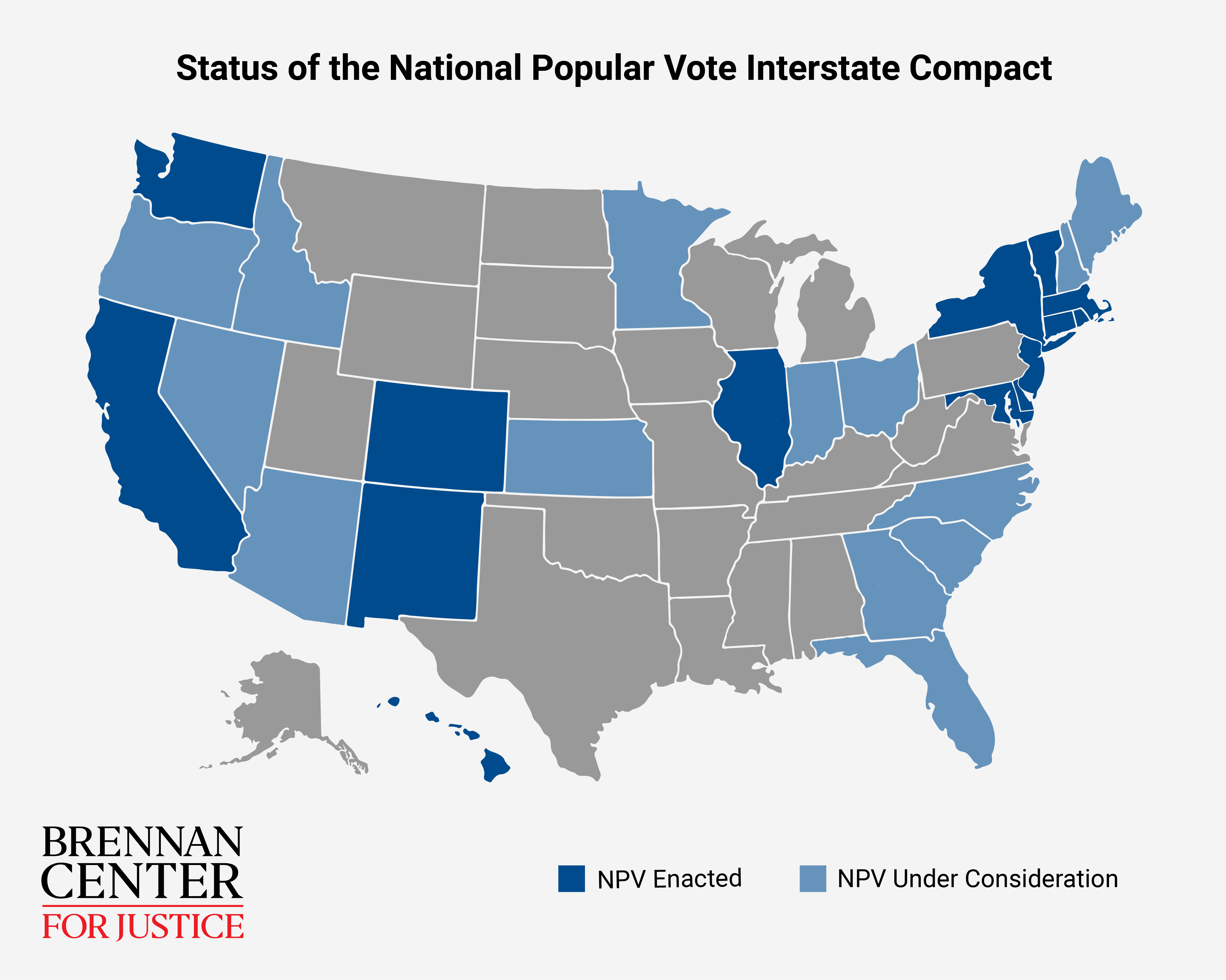 Why not stick with the Electoral College?

The Electoral College is one of the most unique—and undemocratic—elements of the U.S. government. It was originally included in the Constitution as a means to thwart direct democracy. Many of the framers of the Constitution were uncomfortable with giving power to the people, and in part devised the Electoral College as a democratic bypass. The Electoral College was also designed to protect the influence of slave states. Under a provision that counted slaves as three-fifths of a person for purposes of representation in Congress, Southern slave states gained outsize influence in selecting the president. The system has endured despite the expansion of suffrage and the abolition of slavery.

But the problems with the Electoral College extend beyond its historical roots. Basing the elector count off of congressional delegations continues to give disproportionate voting power to people in smaller states. For example, Wyoming voters have nearly four times as much influence as California voters do.

Additionally, under the Electoral College system, electoral outcomes can undermine the popular vote. Because 48 states and Washington, D.C. award their votes on a winner-take-all basis,* it is technically possible for a candidate to win the presidency with around 23 percent of the national popular vote. While that’s unlikely to ever happen, the system can and does fail. In the 1991 book Wrong Winner: The Coming Debacle in the Electoral College, two political scientists predicted that the Electoral College would select the “wrong winner” within twenty years. As we have seen, their forecast turned out to be correct—twice since 2000.

The best permanent solution is to amend the Constitution to abolish the Electoral College. But the system remains intact despite numerous attempts to abolish it in the last two centuries—more than 700, according to the Congressional Research Service.

When has the Electoral College picked the “wrong winner”?

The candidates who won the popular vote have lost in the Electoral College in two out of the last five presidential elections. In the 2000 election, just 537 votes in Florida (and a 5-4 Supreme Court decision that prevented a recount) kept Al Gore from the White House, even though he received over half a million more total votes nationally than George W. Bush. And in 2016, Donald Trump won the Electoral College by a larger margin than Bush despite receiving 2.9 million fewer votes than Hillary Clinton.

Back in 1824, John Quincy Adams lost the popular vote and the electoral college to Andrew Jackson. But no candidate received a majority of the Electoral College votes, so the race was decided in the House of Representatives. In the infamous “corrupt bargain,” Speaker of the House Henry Clay delivered Adams the presidency in exchange for his appointment as Adams’ Secretary of State.

In 1876, Democratic candidate Samuel J. Tilden won the popular vote, but 20 of the electoral votes were contested. Election Day had been tainted with violence and fraud, and in several states, both parties declared that their candidates had prevailed. In the Compromise of 1877, the disputed electoral votes were awarded to Republican candidate Rutherford B. Hayes in exchange for the removal of Northern troops from the South and the end of Reconstruction. And in 1888, incumbent President Grover Cleveland won the popular vote against Benjamin Harrison but lost two states by less than 1 percent—and consequently, the Electoral College.

We will likely see more failures of the Electoral College system in the future. According to Sam Wang, a neuroscientist and election expert at Princeton, “in elections where the popular vote margin [is less than] 3%,” it’s probable that “the Presidency goes to the popular-vote loser about 1 in 3 times.” With the rise of partisan polarization across the country and margins under three percent in three out of the last five presidential elections, it’s highly probable that the system will thwart the will of the majority of the nation’s voters again.

How does the Electoral College disenfranchise voters?

The Electoral College system effectively marginalizes the tens of millions of voters living in solidly red and blue states. In a winner-take-all system, any votes over the 50 percent margin are considered “wasted votes.” This means that voters in states with a heavy partisan lean have a lower chance of actually impacting the election. Public awareness of this fact also potentially lowers voter turnout.

Some claim that the Electoral College amplifies the voices of voters in small states—but it’s actually only a handful of battleground or swing states that receive most of the attention. During the 2016 presidential race, two-thirds (273 of 399) of the general-election campaign events took place in just 6 states (Florida, North Carolina, Pennsylvania, Ohio, Virginia, and Michigan), according to National Popular Vote, an organization that advocates for the Compact. Small states were largely ignored—as were the populous states of New York, Texas, and California, which were viewed as reliably red or blue.

With the NPV, every vote would have equal weight, giving campaigns the incentive to engage with voters in every state.

What’s next for NPV?

The addition of three states in one year is a big win for NPV, and it might not stop there. The Compact is currently under consideration in fourteen additional legislatures in every party of the country. That means there are 150 potential electoral votes that could be added to the total in 2019.

The Compact might not succeed in all of the states in which it has been introduced. But the recent momentum demonstrates that lawmakers across the country see that it might be finally possible to reform the outmoded, undemocratic Electoral College.

*Nebraska and Maine split their electoral votes between the statewide winner and the winner in each Congressional District.