Just as Presidents Day weekend kicked off, special counsel Robert Mueller indicted the Russian organization Internet Research Agency and 13 Russian nationals for interfering in the 2016 presidential election. The fact that Russia meddled in one of our most treasured democratic processes isn’t a revelation—it’s been well-known and confirmed that Russia waged information warfare on the American public to influence our voting behavior.

But the new indictment gave new detail about how Russia brought online an old tactic it has long depended upon: good ol’ fashioned racism. Russia used the U.S. history of racial oppression and its persistent challenges with systemic racism to manipulate (or at least attempt to manipulate) Americans’ electoral choices. And this wasn’t a simple add-on tactic to a larger influence operation. Rather, it’s in keeping with several decades of Russian efforts to use the United States’ treatment of its black citizens as a counterpoint to the American narrative of freedom and equality. The major difference today is that social media marketing allows Russia to do with efficiency and scale what it could never do with Cold War–era print and radio propaganda.

In other words, fanning the flames of America’s racial tensions is as Russian as vodka and blini.

In the 1930s, whenever the United States would criticize the Soviets’ human rights record or civil liberties issues, they’d simply respond, “And you are lynching Negroes.” Soviet media routinely covered racial violence in America throughout the mid-20th century. In 1946, for example, a Russian newspaper reported the beating and torture of a black veteran in Louisiana and the “bestial mobbing” of four black men in Georgia by white mobs who went unpunished. These sorts of tactics were employed through the 1980s when the Soviets aired The Man From Fifth Avenue, a scathing documentary portraying the United States as a society rife with racism, homelessness, and economic inequality through the lens of life in New York City. And they continue today.

We know from Mueller’s findings that the Russians’ goal was to support Donald Trump’s campaign and obstruct Hillary Clinton’s path to victory. So, the strategy is pretty straightforward: Craft racialized messages that reduce black voter support for Clinton while increasing white voter turnout by riling racial resentment. And then get those messages into the appropriate online echo chambers. Et voilà. 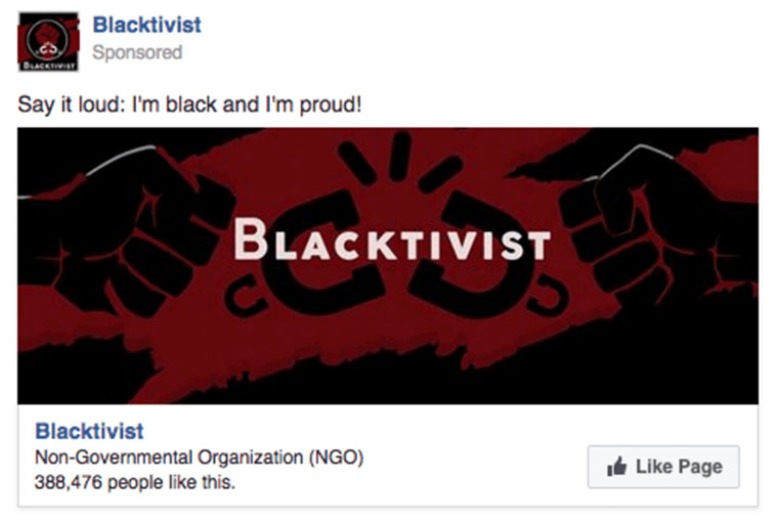 Here’s what the indictment outlined. Russian companies and bad actors “began to encourage U.S. minority groups not to vote in the 2016 U.S. presidential election or to vote for a third-party U.S. presidential candidate.” They used Facebook and Instagram accounts with names like “Blacktivist” and “Woke Blacks” to promote the Black Lives Matter movement and post messages like this: “[A] particular hype and hatred for Trump is misleading the people and forcing Blacks to vote Killary. We cannot resort to the lesser of two devils. Then we’d surely be better off without voting AT ALL.” And they paid for political advertisements that stated, “You know, a great number of black people support us saying that #HillaryClintonIsNotMyPresident” and “Hillary Clinton Doesn’t Deserve the Black Vote.”

This type of propaganda relied on two primary phenomena of present-day politics. First, our engagement patterns on social media platforms filter the information we receive. Our online activities—such as the people and organizations we follow, the pictures and posts we like, the news stories and ads we click on, and how much time we spend on a site—serve to curate the information we receive and tailor our experiences. This creates the infamous filter bubble, a concept Eli Pariser describes at length in his book of the same title, wherein our choices and website algorithms make it far more likely that we mostly consume information on social media that confirms our beliefs.

Second, political scientists have long known that our political beliefs are shaped by our identities and interpersonal interactions. As we self-select into ideological communities online, we also place a higher value on the information we receive there because it’s curated to our tastes through our own actions and through sharing by people we trust. In this way, our politics are socially affirmed and regulated such that our Facebook or Twitter feeds can become a sort of tribal scrapbook and instruction manuals for our political behavior.

Taken together, voters receive particular information, which they are inclined to trust, and are, in turn, influenced by it. This is what Russia was banking on. For example, it could promote Black Lives Matter group pages and purchase ad space targeting an “urban audience,” a well-known euphemism for black people. And as the pages were shared, they would begin circulating within black social media bubbles in the hopes of influencing some segment of the vote. We know this approach is effective as evinced in the success of the Russian propaganda Blackmatterus site and Facebook community. It had more 223,000 likes, sold apparel, had accompanying Twitter and Instagram profiles, and hosted a PayPal account that likely helped fund other Russian trolling efforts. (In fact, PayPal didn’t take the account down until Slate’s April Glaser asked about it.)

For the content of its messages, the Russians only had to listen to voices within black America. Part of the art of information warfare is that fabricating storylines isn’t a prerequisite – in fact, the preferred method is to repurpose and amplify a fact or actual viewpoint. They could’ve easily pulled the “Hillary Clinton doesn’t deserve the black vote” ad from a widely read February 2016 piece in the Nation by Michelle Alexander. They could’ve observed the warnings and debates around black voters supporting Republican or third-party candidates as a protest vote against what they perceive to be an unresponsive Democratic Party. They could’ve noted the last-resort strategy for some black voters of exiting the electoral process altogether by choosing not to vote. As voting rights activist Ed Brown once said, “The view is that blacks have nowhere else to go, but blacks always have somewhere to go—they can go fishing.” Russia happily offered the Caspian Sea.

Russia didn’t need to create fantastical narratives. It simply had to pay attention to black Americans’ frustrations with a nation and a party that isn’t responsive to its political demands. Further, it knew amplifying messages around Black Lives Matter and black activism would also incite low-education white Americans who formed a core segment of Trump supporters. Polls show that nearly 2 in 3 white Americans viewed the Black Lives Matter movement unfavorably and white racial resentment was key to Trump’s election victory.

So when Russian race trolling on social media met primed white audiences, it activated their biases. And when it encountered targeted black audiences, it manipulated their desire for racial solidarity. It’s nearly impossible to determine whether Russian interference effectively suppressed black electoral power or altered the outcome of the election. But this much is clear: Though Russia’s black ops may have gone digital, its weaponization of black America’s experiences is the same game it’s always played.