A new analysis of the most recent spending data shows that big-money outside spending continued to flood this year’s 10 key Senate elections in the final weeks before Election Day. As our prior studies found, the parties are relying enormously on super PACs and secret spending to dominate election spending, and largely unregulated outside groups are outspending the candidates and official party committees.

Even though not all of the spending has been reported yet, two races have already beaten the previous record for total spending in a congressional race, which was $116 million spent in North Carolina in 2014. The new record-holder for most expensive race ever is Pennsylvania, with at least $162 million in expenditures. New Hampshire also beat the prior record, with at least $122 million spent; and Nevada almost certainly will too once all the spending is reported, since available data shows almost $115 million spent there.

Groups other than the candidates and the political parties spent the lion’s share in the 10 key races through October 19, which is the cutoff for the most recent candidate spending data. Outside group spending, vastly most of which comes in unlimited contributions, accounted for 49 percent of all spending. Candidates provided 41 percent of expenditures, and parties made 10 percent. This is a slight decrease in the share of outside group spending compared to our last analysis covering the period ending September 30. 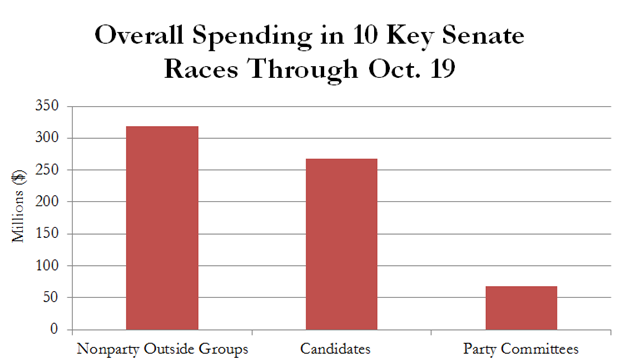 Outside spending in key Senate races is dominated by the Democratic and Republican party networks, which together account for almost half of outside expenditures. But only a fraction of this party spending comes from the party committees themselves. The great majority comes from shadow party groups — outside groups with close ties to the parties that take unlimited contributions and sometimes keep their donors secret.

Both sides’ shadow party super PACs raise vastly most of their money in donations of a million dollars or more. Senate Republicans have been especially dependent on their shadow party groups, which outspent the party committee at a ratio of more than three-to-one. Senate Majority Leader Mitch McConnell reportedly made a late fundraising push that helped Republican shadow party groups run by his former top aide raise $25 million in a week. This increasing reliance on organizations unburdened by the contribution limits and disclosure rules that have applied to the parties for decades is weakening the campaign finance system’s protections against corruption and undue influence by wealthy special interests.

The party networks’ burst of late spending left all other interests far behind. The political network of the billionaire industrialist Koch brothers, which had been rivaling the parties in spending earlier in the election, virtually stopped spending at the end of September. Although the Koch network is still the biggest spending interest after the parties, it is greatly overshadowed by the party networks. 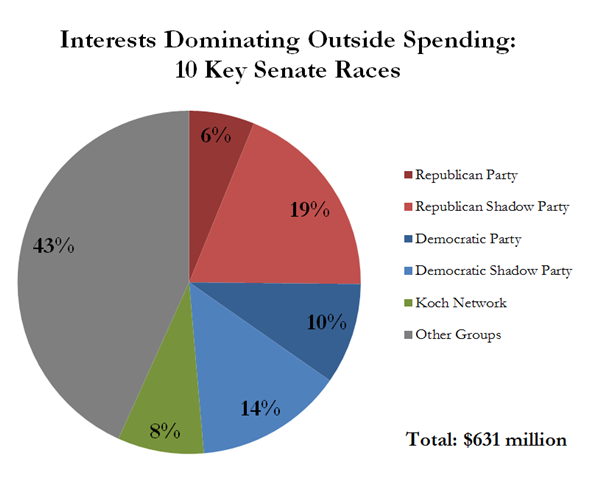