Increased disclosure of political money has been one of the top priorities of reformers for years. It has a trifecta of virtues: a shot at enactment, the ability to pass constitutional muster, and the laudable goal of empowering individual voters. What’s not to like?

Yet, with a few notable exceptions, reporting on the data already produced is not much help to voters. Yes, it’s great that we know, courtesy of opensecrets.org, that of the nearly $315 million Hillary Clinton has raised so far, $53 million or 17 percent, has come from the finance, insurance and real estate sector. (Just for purposes of comparison, the terminally maladroit Jeb Bush campaign raised $60 million from the same industries.)

But on a daily, transactional basis, what is a voter in, say, the upcoming Wisconsin Senate election supposed to do with all the data out there? Most observers believe that the race will culminate with a November showdown between campaign finance folk hero Russ Feingold and incumbent Ron Johnson once Feingold wins an August primary. If my hypothetical Wisconsin voter went to the FEC’s website to learn about the fundraising efforts by Democrat Feingold and Republican Johnson, she would see a lot of numbers.

A quick jaunt over to OpenSecrets, and she would see that the number one profession donating to both candidates is “Retired.” And that lawyers and law firms are in second place for Feingold while securities and investment professionals are the second-largest group of Johnson contributors.

What she would not get from any of these sources is context. Is a 41 percent small donor base better or worse than the norm? How about 30 percent in-state contributions? Is it normal to get so much money from retirees? In fact, what proportion of the money was from retirees? And what about all that securities money?

I can’t answer all of these questions, but I can take a stab at the first one. Feingold is significantly overperforming with small donors while Johnson is not far off the average.

In my last post, I discussed the feasibility of small donors becoming the predominant source of campaign funds and the impact that might have on partisan politics. The post was based on fundraising data from more than 300 Senate candidates from 2010 to the present.

Now I want to offer similar data for the 48 current viable Senate candidates. Overall, small donors account for an average of 13.8 percent across all Senate campaigns. But the variation is large, from 51 percent for Democat Alan Grayson in Florida to 0.4 percent for Republican Richard Shelby in Alabama. Data has been sorted by state because that’s what’s most useful to voters. (Data is current as of June 30. For more on data, see Note on Methodolology.)

The Middle of the Pack: 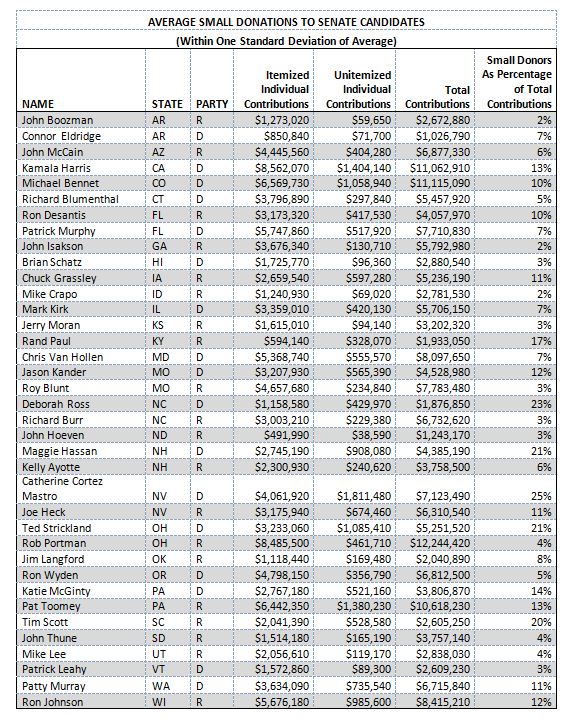 It’s obvious from my last post that I don’t believe small donors are an unalloyed good. Under the current system, small donor success tends to be contingent on uncompromising or alarmist appeals often leaving the candidate captive to an agitated base. But I think a balanced appeal to small donors is salutary. So read this data with care.

I also want to posit that an important next step for the campaign finance disclosure movement is to agree on certain “good guy” fundraising metrics and then to start measuring candidates against them. They should be presented in an easy-to-find, contextualized manner. Here are three ideas worth considering for Senate candidates:

The average portion of all campaign receipts from small donors is 13.8 percent. One standard deviation is 12.2 percent. The average was obtained looking at 218 general and primary Senate candidates from 2010, 2012, 2014, and 2016.

I did not include candidates who had raised less than $1 million. Consequently, for example, the winner of the Colorado Republican primary, Darryl Glenn, is not included in this list since his FEC reports show total receipts of less than $157,000.