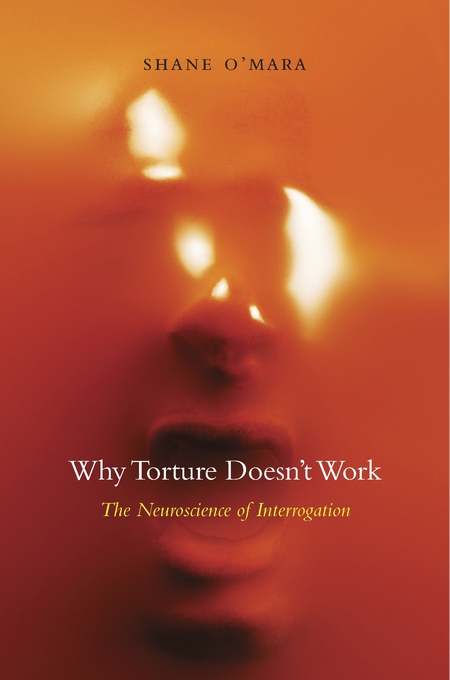 It seems that most Americans know something about torture techniques from watching television shows like “Homeland” and “24.” At least, most of them think they do.

Neuroscientist Shane O’Mara’s book, “Why Torture Doesn’t Work: The Neuroscience of Interrogation,” attempts to bridge the gap between what we think we know about how torture works and what neuroscientists and other researchers really do know.

O’Mara’s premise is simple: there is no evidence-based case for torture, and, in fact, the research evidence indicates that torture is highly ineffective for information gathering. O’Mara, a professor of experimental brain research at Trinity College, Dublin drives home the point in his book that the “imposition of behavioral and physiological stressors affects memory function” in a way that reduces the veracity of the information the tortured can produce and that the use and persistence of torture has “disastrous effects on the brains of its victims.” He points out the fallacy that much of our policy on torture is based on “intuitions or heuristics derived from fiction.”

“Why Torture Doesn’t Work” is a fascinating read about the scientific research around how memory works not just for scientists, but for policymakers, attorneys, academics, and especially for government officials who are involved in interrogation techniques and practices.

In his book, O’Mara refers often to the “Torture Memos, ”Justice Department legal arguments that attempt to justify CIA interrogation techniques, which provide detail regarding George W. Bush’s administration’s tactics that CIA operatives legally used regarding “enhanced interrogation” techniques (EITs), including waterboarding and sleep deprivation. O’Mara pokes holes in the CIA’s use of EITs throughout the pages of this book even venturing to note that the “sense here again is of people with little experience or knowledge trying things out to see what will happen.”

Relying on studies that other researchers have conducted on special operation soldiers who were subjected to prisoner-of war conditions—lack of food and sleep along with extreme temperature variations—O’Mara proves that exposure to significant periods of stress produces gaps in the recall of recently learned information from human memory. The study is particularly compelling because these subjects were selected for their very capacity to withstand stress. O’Mara points to other studies indicating a similar result: imposing extreme stressors on humans causes substantial reductions in cognitive performance. Lessons learned for interrogators should be obvious here. Another fascinating study that O’Mara details indicates that activating “a principally brainstem-based reflexive network that is directed toward immediate survival and that has a principal function of suppressing activity in brain areas that are unrelated to immediate survival…leave a prisoner being tortured incapable of saying much that is useful.” Basically, when prisoners feel threatened to the extent that their brains reflexively focus on immediate survival, they are not in a position to recall past or future events unrelated to surviving the interrogation or even torture.

Perhaps the most interesting chapter in O’Mara’s book focuses on how the brain reacts to sleep deprivation. Calling sleep deprivation a “cognitive pathology,” O’Mara points to research studies indicating that severe sleep deprivation causes “deficits” across cognitive, physiological, and immune functions such that it significantly impinges on one’s ability to think about the past, events and places one has been to, and plans for the future.

For the uninitiated in the terminology and nomenclature around torture, the book is illuminating in its descriptions of waterboarding, white torture, and dietary manipulations. And O’Mara populates research studies throughout the book to support his thesis that none of these forms of torture work, if “work” means to elicit information that will help governments gain useful intelligence to save lives.

His criticisms of the CIA—and just about all government officials who utilize these torture techniques—is resolute. O’Mara points out that one only has to read the literature and research studies conducted on these techniques to understand that these tactics will not produce the results government is looking to achieve.

So what does work to elicit recall and retrieval of information from captives? O’Mara suggests “proper food and water, appropriate clothing, and some degree of control over their own circumstances.” He closes the book with a call to action through research funding to conduct more evidence-based experiments and research on how to question suspects in a safe, reliable, humane, and ethical fashion. He provides some suggestions that are ripe for additional research such as: virtual-reality based approaches, third-party observations, and even experimenting with different layouts of interrogation rooms.

“Why Torture Doesn’t Work” is an absorbing read. Policymakers (whom O’Mara labels as relying “on their own impoverished thinking” when it comes to policy on torture), specifically would benefit from reviewing some of the research that O’Mara uses to bolster his argument. A century of experimental psychology and neuroscience research shouldn’t be ignored when it comes to interrogation techniques.