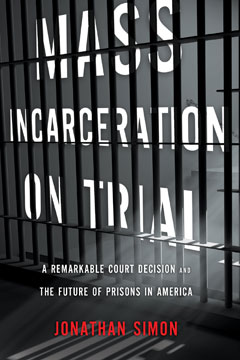 “Mass Incarceration on Trial: A Remarkable Court Decision and the Future of Prisons in America”

Those who are familiar with America’s criminal justice system are cognizant of the statistics swirling around the nation’s dependence on prisons and jails as a crime control policy. The United States boasts 2.2 million adults behind bars, housing more inmates than any other country. Currently, one of every 100 adults in the United States is in prison or jail. And incarceration rates have more than quadrupled in the past four decades. Current rates of incarceration reflect an unprecedented use of prison as a tool in combating crime.

Statistics are what they are. Merely numbers without a face, they can be seen as additional prison beds that need to be built and more correctional officers who need to be hired. But they don’t tell a complete story, and they make it possible for policymakers, judges, and others who work in the criminal justice system to ignore the harsh realities of what it feels like to spend time in America’s prisons. Jonathan Simon, a law professor at the University of California, Berkeley, explores the policies that led to today’s mass incarceration levels through telling the story of a succession of prison condition challenges in California’s courts. In his new book, “Mass Incarceration on Trial: A Remarkable Decision and the Future of Prisons in America,” Simon examines the 2011 U.S. Supreme Court case Brown v. Plata as a lens into the country’s larger dependence on mass incarceration as a crime control policy.

Although policies across the nation over the last 40 years played a pivotal role in creating an incarceration culture, Simon posits that California’s political experiences and resultant prison boom can serve as a microcosm for the nation overall’s addiction to incarceration. Simon writes that California is “the state that most exemplifies the social and legal deformities of the practice.… California went from having fewer than 20,000 prisoners in 1977 to nearly 100,000 in 1990 and nearly 160,000 by 2003.” And California, like the rest of the nation, built prisons as a response to rising crime rates in the 1970s and 1980s and despite dwindling crime rates in the 1990s and 2000s. In fact, Simon points to California’s imprisonment binge, when between 1980 and 2000, the state built 22 prisons. And despite the added facilities, by “the end of the 1990s, chronic overcrowding was reaching crisis level—nearly 200 percent of an already inflated definition of capacity, despite a historic drop in crime.” Simon sagely points to crime data that should not be ignored: that the state’s incarceration patterns had “little or no relationship to crime trends” as crime began to ebb dramatically in the early 1980s, a trend that was also prevalent nationwide.

The book sheds light on some of the reasons behind the nation’s heightened fear of criminals beginning in the early 1970s, and that fear’s resultant tough-on-crime policies. Simon walks the reader through the tendency in the early part of the twentieth century to treat crime and delinquency as a medical problem with rehabilitation as a core goal, until the attitudinal shift in the 1970s towards total incapacitation. Interestingly, Simon points to the prison riots at San Quentin State Prison in California in August of 1971 and New York’s Attica State Prison uprising two weeks later as pivotal moments for the shift away from sympathy towards prisoners to a national anxiety towards those who break the law. Both states were also media hubs, which quickly disseminated images and stories about the dangers of inmates across the country, marking them as “revolutionary terrorists engaged in an unending struggle with both prison and society.”

While the book reads like an extension of a lengthy law review article at times, it is remarkable for its examination of important cases asserting violations of Eighth and Fourteenth Amendment rights for mentally ill prisoners. These cases resulted in the already-infamous Brown v. Plata decision, where the U.S. Supreme Court ordered California to reduce its prison population by approximately 40,000 prisoners, or find another option by which to achieve a 137 percent of design capacity, within two years.

The book’s theme centers on the idea that building so many prisons and then filling them to double and often triple their capacity (Simon points out that more than half of the states had prison populations well in excess of design capacity in 2010) led to thousands of prisoners across the nation experiencing constant exposure to extreme medical and mental health suffering. Imbuing a human rights framework into prison conditions, Simon argues that Plata “put the human dignity of prisoners back at the constitutional center of the Eighth Amendment.” Plata and the cases that led up to it teach a vital lesson: “human dignity and public safety go together; one cannot flourish without the other.” The majority opinion in Plata articulates that, “Prisoners retain the essence of human dignity inherent in all persons. Respect for that dignity animates the Eighth Amendment prohibition against cruel and unusual punishment.”

Simon writes about the unprecedented nature of the federal court’s largest prison injunction order in history and notes that it serves as the first major court-ordered reform of a state prison system since the Prison Litigation Reform Act of 1996. In Plata, the federal judiciary could not ignore images of bunk beds squeezed into parts of the prisons designed for work; inmates milling about in overcrowded conditions; holding cells for inmates waiting for mental health treatment; and documented evidence of inadequate health care for inmates.

In mapping a way forward, Simon introduces innovative legal devices to ensure that mass incarceration joins the nation’s past aberrations from our democracy, including slavery, Jim Crow, and the treatment of Native Americans. His idea is to amend the state constitutions and the U.S. Constitution “so that our central norms against excessive and abusive treatment and punishment are modernized to address the now-recognized threats of mass incarceration.” This can be accomplished, Simon argues, by adopting language from the Universal Declaration of Human Rights that “No one shall be subjected to torture or to cruel, inhuman or degrading treatment or punishment.”

Simon points out that Plata’s most noteworthy jurisprudential legacy may in fact be its declaration of dignity as a constitutional value as it relates to prisoners. Indeed, dignity is a central theme of the book—and a concept that seems to have eluded our nation, as it has become commonplace to stuff prisoners in prisons that lack enough beds, proper health care, and even a modicum of dignity.