As my colleague Ian Vandewalker testified yesterday, and explained in greater detail last week, there is substantial evidence that passing comprehensive campaign finance reform — including greater enforcement, lower contribution limits, and public financing — is the single best way to combat the “show me the money” culture of corruption in Albany.

But what do we mean by corruption?  Of course there’s illegal corruption — such as bribes or extortion — of which there is far too much in Albany. In the last decade alone, at least 18 state elected officials have been convicted or charged with corruption, including three of the last five Senate majority leaders.

But there is also the corruption of the system itself —  a system that requires elected officials to spend almost all their time raising money from special interests, not with their constituents. As the Brennan Center and the Campaign Finance Institute have demonstrated, adopting comprehensive campaign finance reform of the kind that currently exists in New York City changes all that. Under the city’s system, candidates can’t raise big checks from special interests. Instead, they raise money from small donations in their districts.

A report out this week from the New York City Campaign Finance Board echoes this point with a dramatic graphic comparing fundraising under the New York City system to fundraising for state office. As it illustrates, special interest money (meaning unions, corporations, PACs, etc.) is almost everything in state races, and almost nothing in city races. 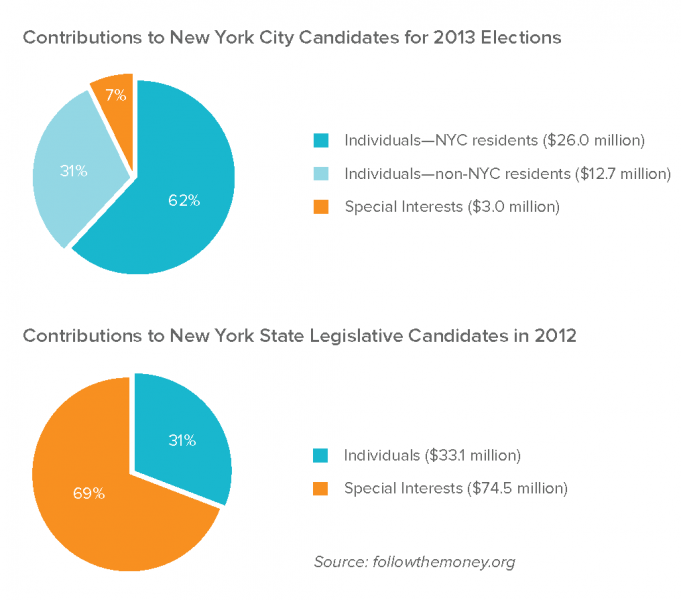 Unfortunately, it’s not very hard to imagine why defenders of the corrupt status quo are so anxious to kill reform.