Tomorrow in Baltimore, a panel of three federal judges will hear argument in Shapiro v. McManus, a lawsuit by Maryland voters who contend their state’s congressional map is unconstitutional due to partisan gerrymandering. Tuesday’s hearing — on the question of whether the suit should proceed to a trial — is the latest development in a case that could soon present the U.S. Supreme Court with its first opportunity in more than a decade to address unresolved questions about the viability of partisan gerrymandering claims brought under the First Amendment.

The argument will focus on the legal sufficiency of the plaintiffs’ complaint, which challenges the 2011 congressional redistricting plan enacted by the Maryland General Assembly. That map, which was widely panned, left Maryland in an essential tie with North Carolina for the (dis)honor of being the U.S.’s “most gerrymandered state,” according to The Washington Post.

The plaintiffs argue the redrawn 6th District was a deliberate and surgical effort to convert it from a Republican stronghold into a safe Democratic seat, giving Democrats a 7–1 advantage in Maryland’s congressional delegation.

Before the 2011 round of redistricting, Rep. Roscoe Bartlett (R) had represented the 6th District in the U.S. Congress for nearly 20 years, easily winning the 2010 election by a 28-point margin. According to the plaintiffs, the Democratic-controlled General Assembly saw a chance to target the seat and — equipped with detailed data on the political party memberships, party registrations, and voting histories of citizens in the 6th District (and its surrounding districts) — removed over 360,000 residents from the mostly-Republican counties in the northern part of the district along the Appalachian foothills. They were replaced with nearly 350,000 residents from the predominantly Democratic and urban Montgomery County, which borders Washington, D.C. These shifts in the district’s lines resulted in a net transfer of roughly 65,000 Republicans out of the district and about 30,000 Democrats in. With the new districting in effect, the results flipped and Rep. John Delaney (D) defeated Bartlett by a 21-point margin. 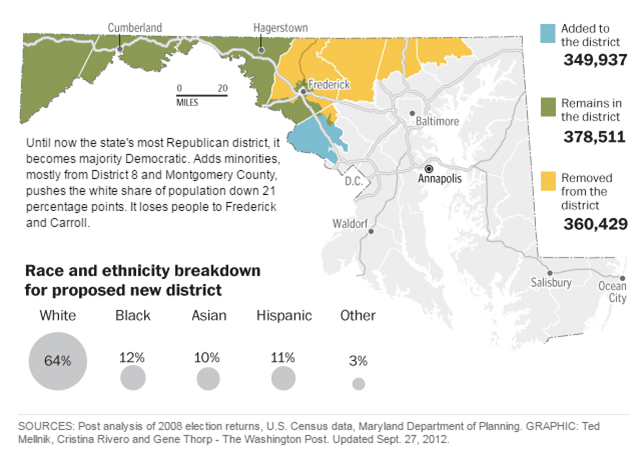 The plaintiffs contend that Maryland Democrats’ redistricting efforts violated the First Amendment because they deliberately targeted and punished voters who supported Republican candidates by making it impossible for Republicans to win elections in the district. Framed like this, Shapiro offers a key potential opportunity for courts to recognize and develop the First Amendment theory of partisan gerrymandering first sketched out by Justice Anthony Kennedy in his concurrence in 2004’s Vieth v. Jubelirer. In Vieth, Justice Kennedy explained “that First Amendment concerns arise” in the partisan gerrymandering context “where an apportionment has the purpose and effect of burdening a group of voters’ representational rights.”

The defendant election officials contend that the plaintiffs haven’t demonstrated the kind of simple, judicially manageable standard for evaluating partisan gerrymandering claims that the Supreme Court has long demanded from litigants. Without this, they argue, it is impossible for a court to say exactly when a map crosses the line. The defendants also say that Maryland’s line-drawing process hasn’t burdened voters’ individual rights of expression or association, because voters can still participate in political campaigns and cast ballots regardless of the district they are placed in. Moreover, the plaintiffs haven’t come forth with any allegations of how the 2011 plan has chilled the First Amendment conduct of Republican voters.

The three-judge panel will be the first to resolve this dispute, but the Supreme Court — which has already weighed in once in this case on a procedural matter — likely will have the final word. Once before the Court, the parties will face a bench with a very different composition from the one that fractured over the partisan gerrymandering fights of the mid-2000s. A compelling First Amendment case might be just what a majority of the Court will need to unify around a long-sought standard for policing partisan gerrymanders.