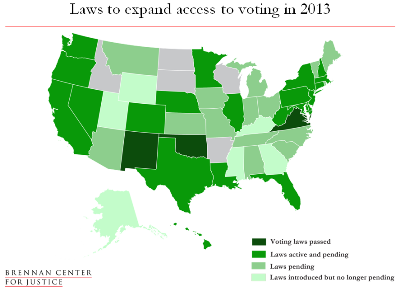 Nearly 200 bills to expand voting access were introduced in 45 states in 2013 (click map for larger view). Of those, 41 bills in 21 states are currently active, meaning there has been some form of activity, such as a hearing or vote. Three states, New Mexico, Oklahoma, and Virginia, have already passed expansive laws.

Many of these new bills are drawing bipartisan support. The GOP introduced an online registration bill in Pennsylvania and passed it in Virginia. New Mexico’s new law streamlining registration at state DMVs received broad bipartisan support and was signed by a Republican governor. And in Colorado, Democrats in the legislature worked with the mostly-Republican Colorado County Clerks Association to draft a modernization bill, which passed the House Friday.

The Brennan Center is also tracking restrictive voting measures across the country. At least 80 restrictions have been introduced in 31 states. Of those, 25 bills are active in 12 states, and three are already signed into law. Virginia passed two restrictions — one curbing registration drives and another requiring photo ID to cast a ballot — and Arkansas passed a strict photo ID measure. North Carolina legislators are considering a series of bills to cut early voting, require a photo ID, and eliminate same-day registration.

“Although states continue to push restrictions, others have gotten the message from the 2012 election,” said Wendy Weiser, Democracy Program Director at the Center. “Americans deserve better and want a higher functioning, more modern voting system. Both Republicans and Democrats, in states from Colorado to Pennsylvania to Nevada, are working to give them one. It’s time to end the partisan voting game and ensure every eligible citizen can make their voice heard on Election Day.”

Read more on voter registration modernization from Wendy Weiser in The Denver Post and former McCain campaign lawyer Trevor Potter in The Atlantic.