Every year the Justice Department’s National Prisoner Statistics (NPS) program collects numerical information about prisoners.  According to the recently released report for 2014, that picture remains bleak, but there are indications of improvement.

The estimated total number of prisoners held by state and federal correctional authorities was 1,561,500 on December 31, 2014. That’s down by 15,400 people or one percent from the previous year – the second largest decline in the number of prisoners in more than 35 years. Moreover, the total prison population at the end of 2014 is the smallest since 2005.

The decline was the result of prisoner reductions in 24 states and the federal system outpacing prison population increases in 21 state prison systems (data to calculate year-to-year changes was not available for five states).  The current imprisonment rate of 471 prisoners per 100,000 residents is the lowest in more than a decade. 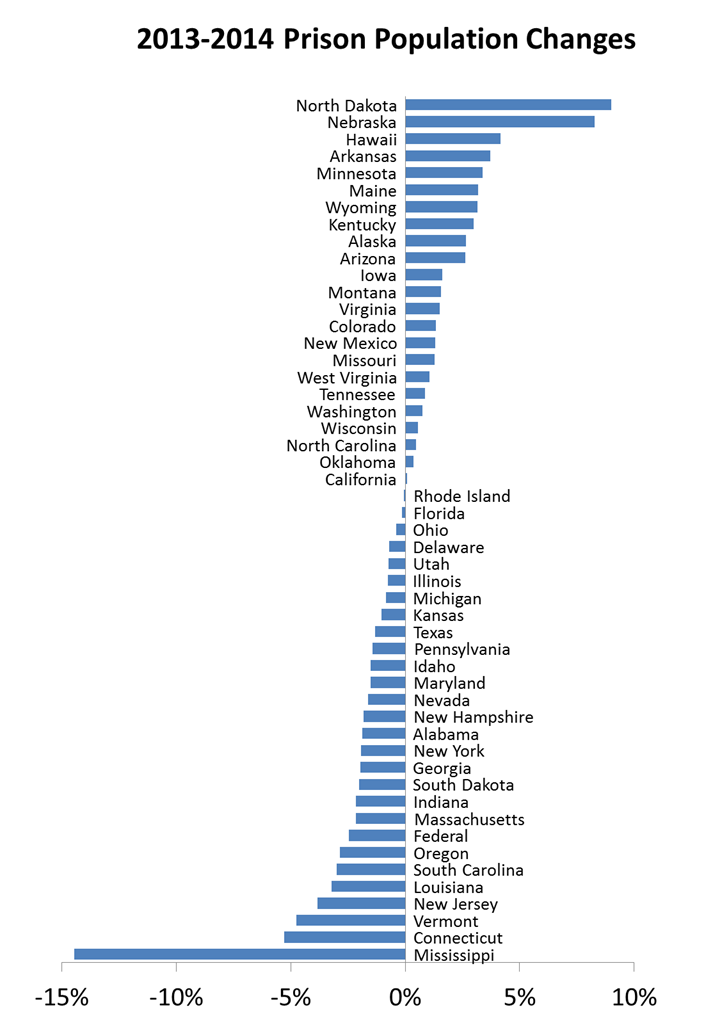 Declining prison populations should be good news, for both offenders and the taxpayers who pay to house them. So why don’t we see either group cheering?

The answer is that taxpayers are still footing a big bill, just from a different creditor.  While prison populations are shrinking, jails are rapidly adding occupants to their rolls – meaning that on net, the government has realized very little cost savings.  Meanwhile, those who avoided prison aren’t remarkably better off, general landing in jails.  Furthermore, those who remain in prison are serving out longer sentences. 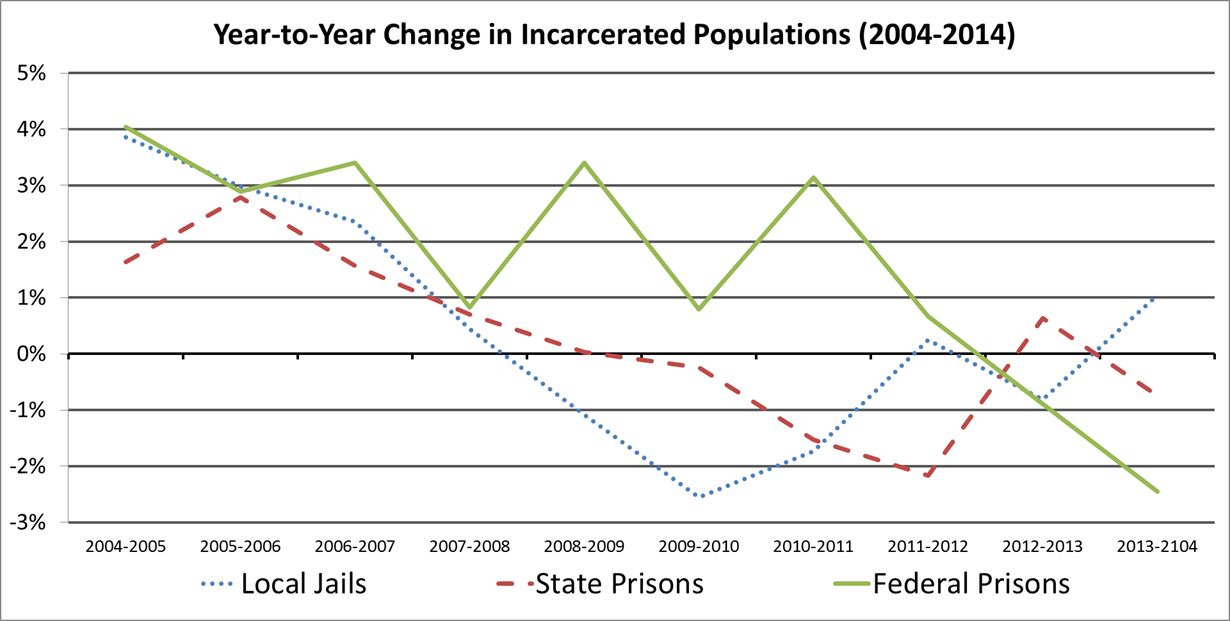 For taxpayers, the savings from prison reductions could be close to $500 million. That estimate was generated using data compiled in a comprehensive report by the VERA Institute of Justice in 2012, which pegs the average annual cost per inmate at $31,286.  Applying these estimates to reductions/increases to the incarcerated population is a crude measure of inmates’ actual costs due to economies/diseconomies of scale, but it is nonetheless the best available.

While those prison savings were accruing, jail costs were undoubtedly rising.  Another government survey, Jail Inmates at Midyear 2014, shows that from midyear 2013 to midyear 2014 county and city jails increased their occupancy by 13,384 inmates.  This increase largely blunts the impact of the state prison reductions over the same time period.

The decline in prison population is still an indisputably positive development in the effort to end mass incarceration.  The prison population has now fallen four of the last five years and these decreases suggest that parts the criminal justice system have begun to adopt a smarter approach to punishment. Rather than wantonly assigning long prison terms, more jurisdictions are diverting low-level offenders to jail and community supervision programs.

Still, the pace of reform is painfully slow and not everyone has reason to applaud the data in Prisoners 2014.  Among those likely to be disappointed are currently incarcerated federal prisoners. For them, not much has changed:

“The decrease in the federal prison population from yearend 2013 to yearend 2014 was driven by declining admissions rather than an increase in releases,” the report states.

Admissions to federal prisons fell by a whopping five percent in 2014 relative to the previous year, but releases declined by only one-half of one percent.  Again, reducing the number of admissions is unequivocally a positive development, but without significant changes in the number of releases, incarceration rates won’t return to comparatively reasonable levels for decades.

The federal prison system is especially well-suited to increase their release rate, as half of all federal prisoners are serving sentences of ten years or more and nearly 17,000 of these prisoners are already at least ten years into their sentence, according to the U.S. Sentencing Commission.  Attempts by social scientists to link lengthy sentences to lower recidivism rates have provided “mixed” and generally inconclusive results.  In the absence of a compelling public safety justification prison officials should utilize their decade (or more) of observational knowledge to identify inmates who could serve the remainder of their sentences outside prison, where they pose relatively little risk to the community and would do so at relatively little cost to taxpayers.

To this end, the federal system could take their cue from the state prisons, where admissions fell by a relatively modest one-tenth of one percent, but releases rose by 2.2 percent from 2013 to 2014. On balance, these changes allowed an additional 12,612 ex-offenders to re-enter the community – more than double the number of former federal prisoners returning to the free world.

There is general agreement among both criminal justice professionals and political leaders that incarceration levels are too high. Equally important, there is support from the public for reform. According to a survey of voters likely to vote in the 2016 election, 69 percent say it is important for the country to reduce its prison population. The problem is that at current rates of decline, the reductions necessary to return to anything that could be considered a rational level of incarceration would take decades and cost hundreds of billions of dollars.

For example, suppose we returned to the level of incarceration experienced prior to the passage of The Violent Crime Control and Law Enforcement Act of 1994 (commonly known as the Crime Bill).  Seeing as crime rates are now at their lowest levels since the 1960’s, returning to the rate of incarceration observed before passage of the Crime Bill – which would be roughly half of what it is today—seems reasonable (although it would still leave the U.S. with a higher incarceration rate than any European country today).  The Crime Bill was the most comprehensive legislation of its kind in U.S. history, and, among other things, allocated $9.7 billion to the states to build more prisons. It was also during this time that 23 states passed three-strikes legislation, ensuring very long or life sentences for repeat offenders. 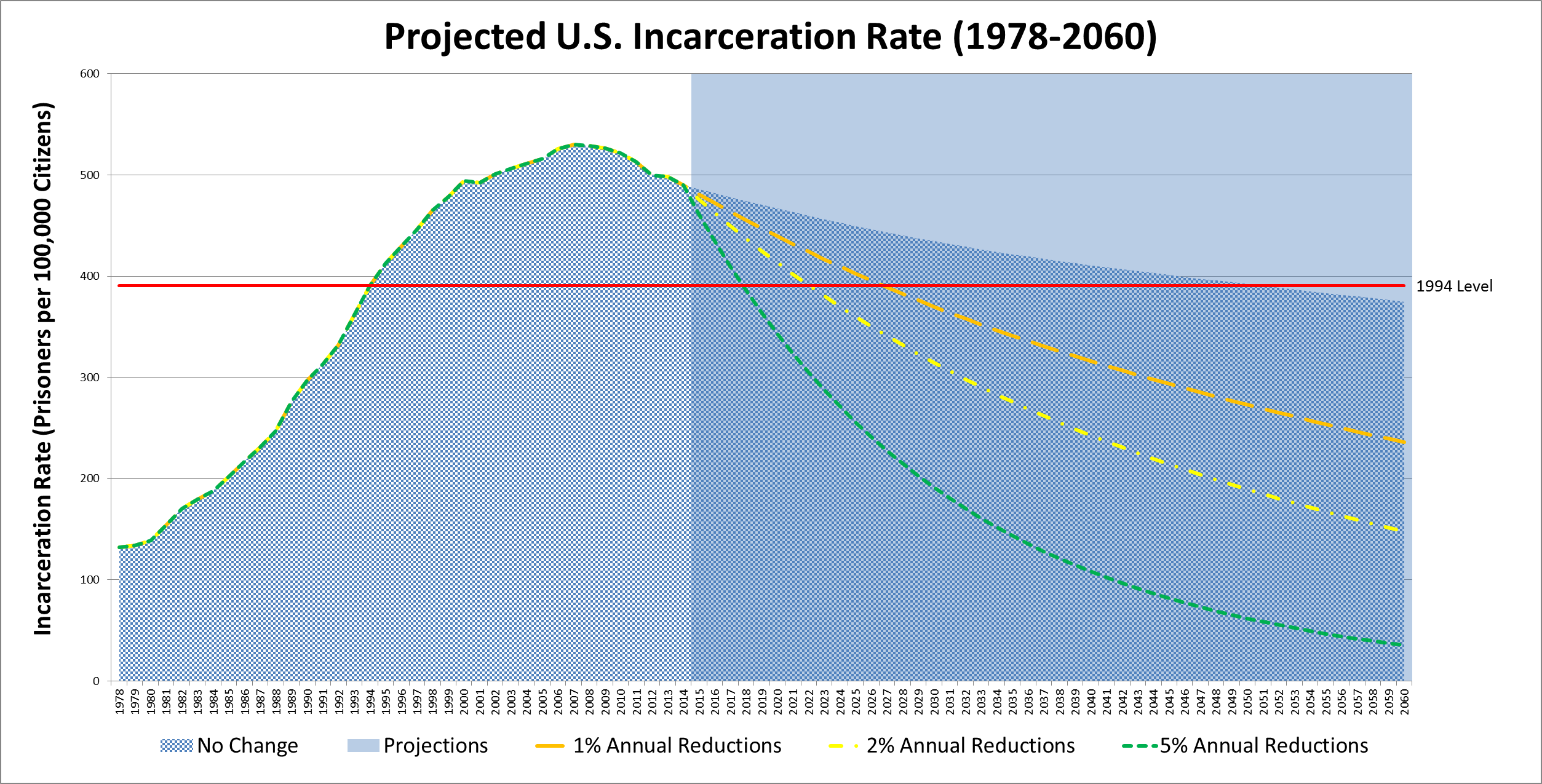 To put it another way, this year (on average) we will spend an additional $9.8 billion to incarcerate our fellow Americans than we would have if 1994 incarceration rates prevailed today.  Every year, we add to that total.  With no change in the incarcerated population, we won’t return to 1994 imprisonment rates until we have spent an additional $170 billion (in constant 2012 dollars) to keep these ‘extra’ prisoners behind bars at the human cost of a cumulative 5.4 million person-years.  That is projected to occur in 2051, but from atop America’s mountain of prisoners, and from inside America’s prisons, 2051 looks a long way off.