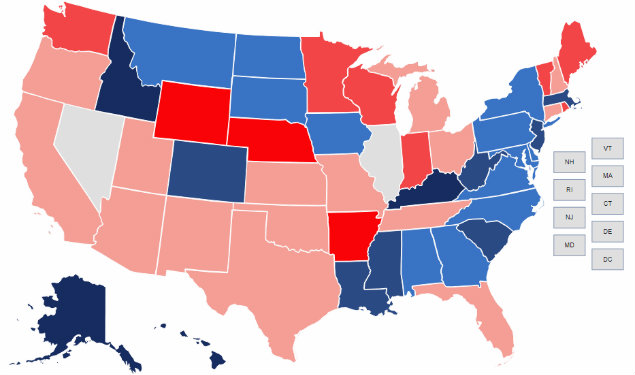 (Click here for an interactive map breaking down changes in state imprisonment rates from 2012–13.)

According to BJS, our nation’s state and federal prisons house an estimated 1,574,700 people. That number increased by 4,300 from 2012 to 2013, a 0.3 percent increase. This increase was largely thanks to an additional 6,300 inmates in state prisons. It was actually offset by a decrease of 1,900 federal prisoners — the first federal decrease since 1980. 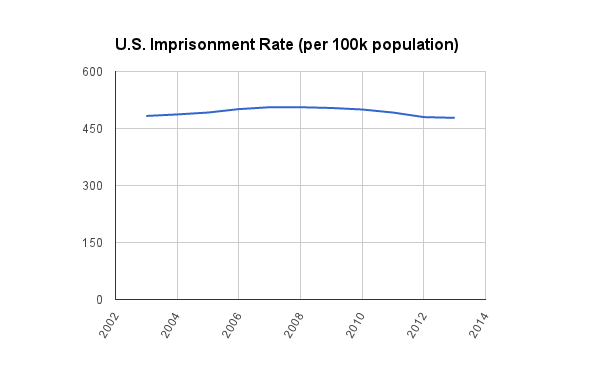 But the good news is tempered. It’s true the rate has declined for five years in a row, but the declines have been modest.  This year’s decline represents the most modest. To wit, here’s the same chart as above, but “zoomed in” to more clearly illustrate the changes: 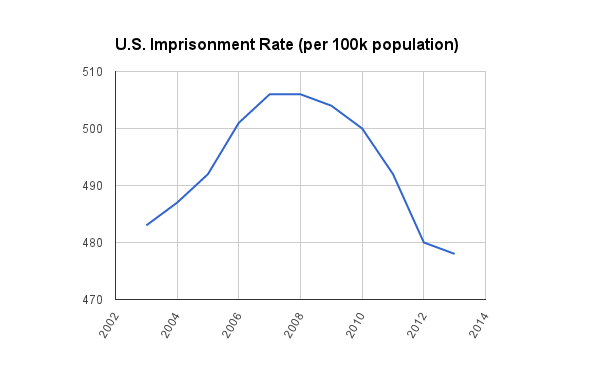 The change in the imprisonment rate, which had been falling relatively quickly from 2008 to 2012 — after a long period of growth — leveled off decidedly in 2013. While the trend in the national rate was more or less flat, many states have seen more dramatic changes in their imprisonment rates over the past year. Here are all of the states’ percentage changes in imprisonment rates from yearend 2012 to yearend 2013 (Illinois and Nevada are omitted as they did not submit data to the National Prisoner Statistics Program): 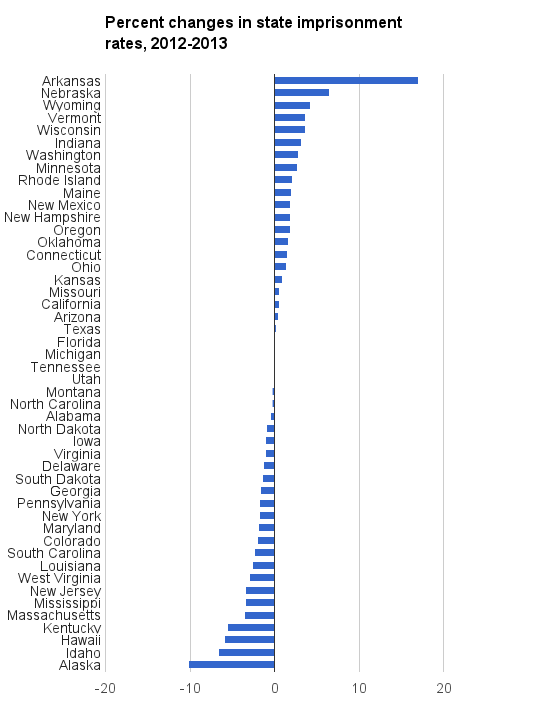 If this were a boxing match, it’d be a split decision: Twenty states saw increases in their rates. Four states saw no change. And 23 states saw decreases.

Academic researchers, as well as many on both sides of the political spectrum, have begun to settle on the idea that incarceration is ineffective — it is costly, and it is an inefficient means of crime control. This is especially true in the U.S., where the incarceration rate is the world’s highest, completely out of line with other developed countries. In the language of economics, incarceration in the U.S. has been subject to dramatic diminishing returns. If it was ever effective as a crime reducer, it no longer is, given the nation’s prodigious proclivity toward imprisoning offenders.

At the national level, the new BJS numbers may not appear to cause celebration or despair. Upon further analysis, however, there are reasons to be concerned with this new data. 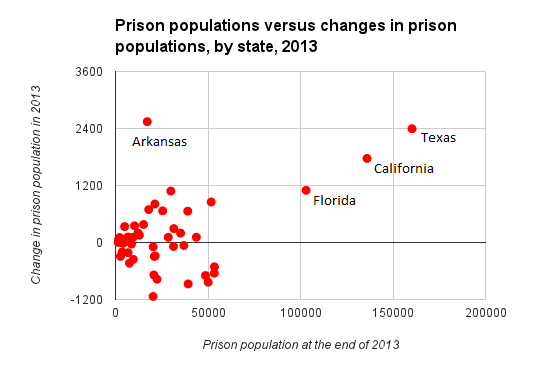 Florida, California, and Texas have, by far, the three biggest prison populations in the country (they are furthest to the right). They also experienced three of the biggest increases last year (they are some of furthest up).

California demonstrates the point. California modestly reduced its prison population since 2007. Starting in 2011, California adopted drastic reforms to comply with a federal court order to reduce its prison population. The Golden State adopted the Public Safety Realignment Plan, which shifted nonviolent, non-serious, non-sex offenders from state to county responsibility. Ideally, this reform would reduce the prison population and reduce the total incarcerated population through an increase in alternatives to incarceration at the county level. BJS data demonstrates that this is not happening. After two years of significant decline, California’s prison population increased by some 1,770 inmates in 2013. Meanwhile, the benefits of Realignment are slowing. The state released 23% fewer prisoners this year than last. The state’s jail population (not included in BJS statistics) increased by 7,600 people by year-end 2012. BJS data demonstrates that California’s reform shifts offenders from state prison to county jail, but it may not reduce incarceration in the state.

Second, prison admissions increased in 2013. Thirty one states increased their prison admissions in 2013 despite momentum across the country to implement reforms aimed to address this driver of prison populations in particular. For example, Texas’ reforms focus on reducing admissions to prison through treatment and diversion programs. These reforms reduced the state’s prison population and resulted in the closing of several state prisons. But in 2013, Texas suffered a 1,000 person increase in state admissions even as the state released fewer prisoners.

These realities paint a bleaker picture, but there are reasons to remain hopeful as well. There are two factors that primarily drive prison populations – prison admissions and sentence length. Many states, such as Texas, focused their reforms on addressing prison admissions. BJS data this year indicates such reforms alone cannot reduce mass incarceration.

The new BJS data reiterates that incarceration trends vary significantly from state to state. Each state provides a unique testing ground for reforms to address mass incarceration. The 2013 data suggests that some recent reforms provided short term solutions. But mass incarceration is a long term problem. We would be wise to learn from this data and adjust our approach to try different methods of addressing overreliance on incarceration. Reforming funding streams and implementing sentencing reforms are two alternative methods. As the Brennan Center has shown, criminal justice grants and funding can be reformed by realigning potentially perverse incentives. Similarly, sentencing reforms are critical to reducing incarceration. Combining these reforms may be the most promising alternatives for the future.