Sunday’s New York Times op-ed page highlighted the case of Ernest Dewayne Jones, who spent nearly two decades on death row in California. On July 16, Mr. Jones’s death sentence was vacated by the U.S. District Court for the Central District of California, which cited delays caused by California’s inadequate indigent defense system. The Court wrote that “delay is likely due to the severe shortage of qualified attorneys.”

It’s no secret that public defenders across the country are typically overworked and underfunded. Recent reports — published by the Constitution Project, National Association of Criminal Defense Lawyers, and the Brennan Center — found that “sometimes the defenders have well over 100 clients at a time,” that “the lawyers have crushing caseloads,” that “counsel is unable to spend sufficient time on each of their cases,” and even that “frequently, judges and prosecutors are complicit in these breaches.”  The problematic status quo was the subject of the 2013 documentary "Gideon’s Army," which underscored the failure of our public defense system to live up to the seminal Gideon v. Wainwright Supreme Court ruling recognizing the constitutional right to an attorney for criminal defendants who cannot afford one.

Just last week, the Bureau of Justice Statistics released new data on state government indigent defense expenditures, through the end of fiscal year 2012. And it turns out the situation may not be improving.

The picture the data paints is decidedly mixed. Over the past five years, 18 states increased indigent defense spending, while 26 decreased it. (Six states, including California, are omitted from this analysis due to unreliable or inconsistent reporting of data.) Nationwide, spending is down 4.3 percent over that time. Here are the states’ percentage changes in spending over the past five years (in 2012 dollars):

Nationwide, $2.2 billion was spent by states on indigent defense in FY 2012 — the lowest amount in the past five years. By comparison, the total budget of all state prosecutors offices is roughly $6 billion a year (this figure is from 2007, the most recent available from BJS). 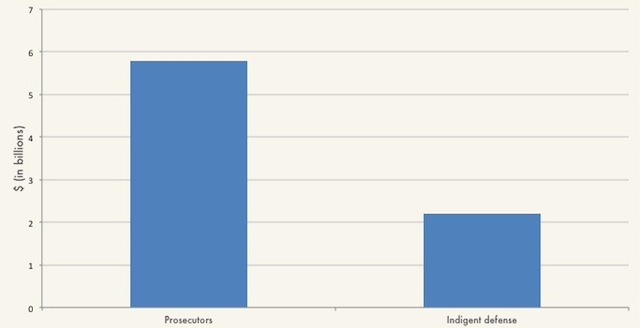 The impact of insufficient defense extends far beyond unconstitutional delays in death penalty cases. It may also be responsible for increases in a state’s incarcerated population. For example, as noted in a Brennan Center report, “[P]rosecutors often bring charges against defendants that are far higher than warranted by the facts of the case, and defenders often do not have time or resources to assertively negotiate with prosecutors in plea discussions. Defendants are then left to accept unfair plea deals rather than risk trials that may leave them behind bars for even longer.” As a result, alleged offenders who with effective defense may have had a reasonable chance at avoiding time behind bars can end up in prison.
Here are the states’ changes in spending (on the horizontal axis) with their changes in imprisonment rates (on the vertical axis) over the past five years. Each bubble, sized by population, represents a state: 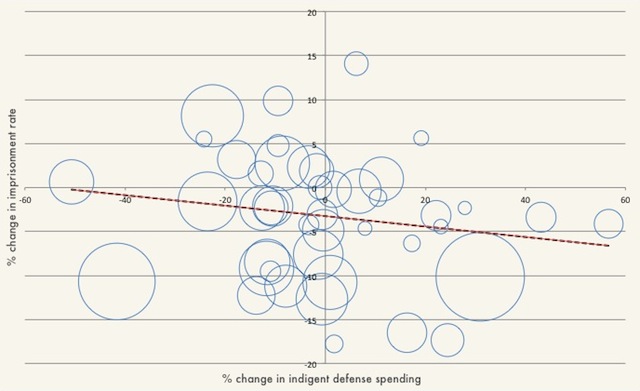 And, indeed, the dashed trend line reveals a negative relationship between the two. In other words, an increase in spending on indigent defense is associated with a decrease in incarceration. Of course correlation is not causation, and other factors could certainly confound the relationship, but this picture suggests that a state increasing its indigent defense budget may expect to see a resulting decrease in incarceration.
Recent research has started to reveal the ineffectiveness of incarceration as a crime-reduction tool, especially at its current astronomical levels. And regardless of how successful incarceration is at reducing crime, we have a constitutional obligation to provide each defendant an effective public defense. Given that, combined with the high fiscal cost of incarceration, states might do well to consider an increase in indigent defense spending. This could achieve a threefold goal: providing a constitutionally guaranteed right, trimming an expensive incarcerated population, and all the while not increasing crime rates.
(Photo: Thinkstock)
Stay up to date