New York, N.Y. – Election officials across the country say they are heading into the 2018 midterms with outdated voting machines and computer systems, and many of them do not have the resources to replace them. In response to a nationwide survey distributed by the Brennan Center for Justice at NYU Law, 229 officials in 33 states reported they need to replace their voting machines by 2020. Most of these officials do not currently have enough funds for those replacements. The Brennan Center says these old machines are more vulnerable to breakdown, malfunction, and hacking.

“Too much of the nation’s election infrastructure is crumbling,” said Larry Norden, deputy director of the democracy program at the Brennan Center. “More than two-thirds of officials who told us they need to replace their machines before 2020 also said they have inadequate funds to do so. Continuing to use this equipment not only makes our elections more vulnerable to breakdown and malfunction, but to hacking as well. Election officials across the country are ringing the alarm. And so far, lawmakers have failed to listen.”

Election experts warn that by the end of the decade, most of the nation’s vote-tabulation machines will reach the end of their natural lives. More than 500 election officials in 41 states surveyed told the Brennan Center they will use machines and computers in this year’s midterms that are more than a decade old. This comes as the secretary of state and the head of the CIA have both said U.S. election systems are vulnerable to outside intrusion this year. 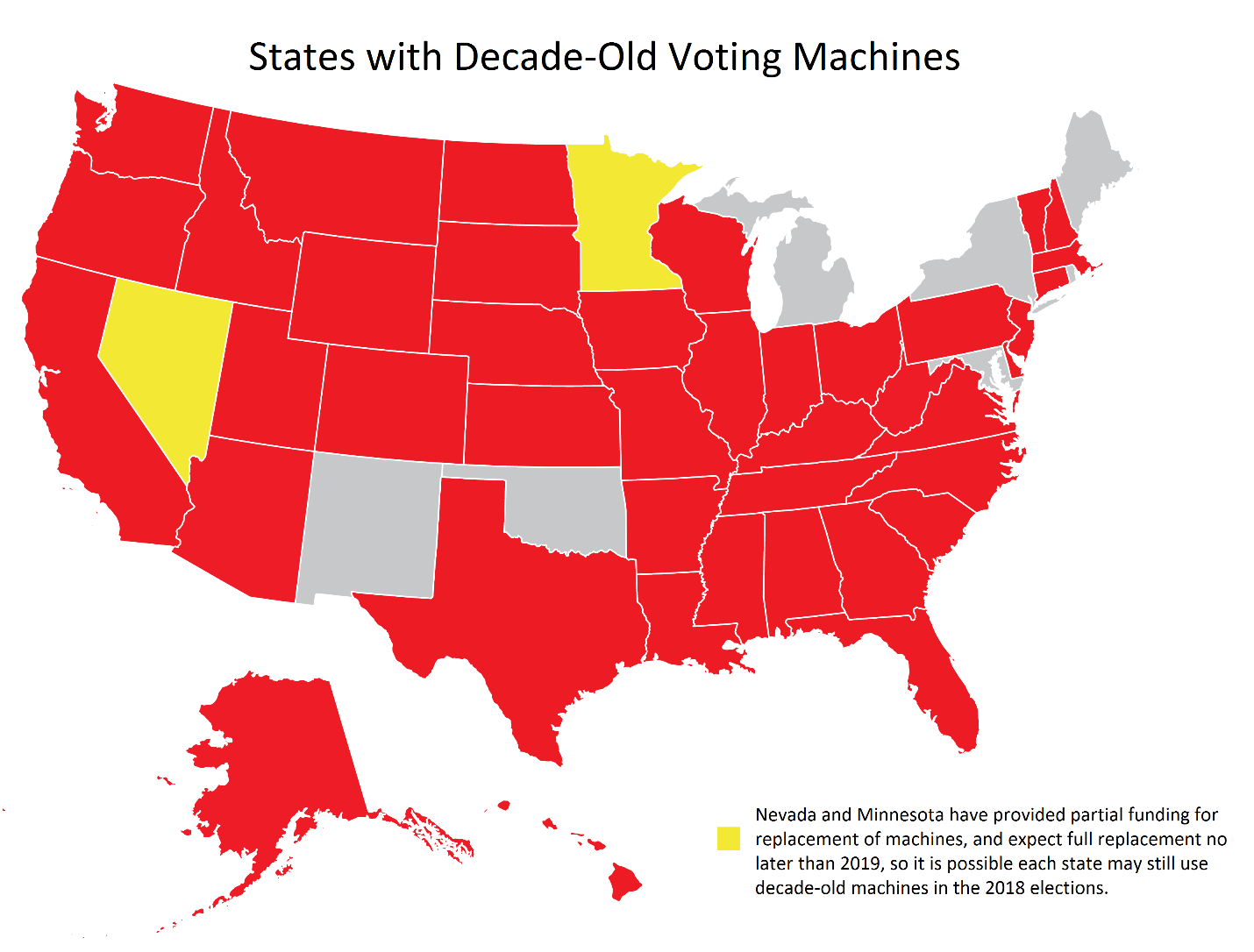 “The sky really is falling,” Neal Kelley, registrar of voters for Orange County, California, told the Brennan Center, explaining the urgent need to replace equipment. He supports 11,000 outmoded voting machines and said he frequently buys older machines to cannibalize for spare parts. “We’re taking systems out of service because we can’t repair them anymore,” he said.

“Unfortunately, for every step forward, there are far too many steps back,” said the Brennan Center’s Norden. “There are three bipartisan bills languishing in the Congress right now that would provide the necessary funds to start fixing our election systems. And as of now, there’s not a single hearing or vote scheduled.”

The lack of resources for staffing and infrastructure has left many normally reticent election officials speaking out in frustration. “At some point, we simply will not be able to pull it off,” Kimberly McKiernan, director of elections in Rappahannock County, Virginia, told the Brennan Center. “We have been saying this to our legislators for years now. It’s only a matter of time before there is a catastrophic failure in our election process…Is that what our legislators want?”

As the Brennan Center previously reported, Election officials have resorted to buying spare parts on eBay. Some older machines run on Windows 2000, an operating system that no longer receives regular security patches, making those systems more vulnerable to attack.

To schedule an interview or connect with a Brennan Center expert, contact Stephen Fee at 646–925–8720 or stephen.fee@nyu.edu.

The SAVE Act (Senate)