How should Congress react to Robert Mueller’s testimony, which confirmed that President Trump,  far from being “exonerated,” is actually guilty of serious criminal behavior for which he would have been indicted if he wasn’t a sitting president? Mueller testified that Trump’s non-indictable crimes included lying to investigators, urging others to lie, allegedly dangling pardons to shut people up, firing James Comey, attempting to fire Robert Mueller, and orchestrating unlawful hush money payments.

And that’s not all. Mueller’s testimony also makes it clear that Trump’s campaign played along with Russia’s massive unlawful efforts to tip the 2016 election. In his report, Mueller explains that the only reason he did not indict the Trump campaign for colluding with the Russians was the campaign’s successful claim of willful ignorance that they were benefiting from the largest illegal campaign contribution in history. Specifically, the campaign was allegedly unaware that Russian officials were unlawfully spending hundreds of millions of dollars to help put Trump in the White House.

One potential response to Mueller’s testimony is impeachment by the House and trial in the Senate. The perjury, obstruction of justice, and conspiracy to violate the campaign laws described by Mueller are high crimes and misdemeanors that justify impeachment. Indeed, a sitting president’s current immunity from indictment and prosecution leaves impeachment as the only formal path to punishment. Delaying indictment until the president leaves office is insufficient, especially since Trump can pardon himself as he closes the White House door. The problem, of course, is that the impeachment route would be purely symbolic because conviction by two-thirds of the Senate is functionally impossible.

A second response involves the continuation of multiple Congressional investigations into Trump’s criminal behavior. However, as Mueller’s testimony demonstrated, Congressional hearings generate sound-bites for the six o’clock news — but not coherent narratives of presidential wrongdoing that will sustain public attention.

There is, however, a third approach that, while unprecedented, is clearly constitutional, achievable by a majority vote, and highly likely to develop a coherent narrative of presidential misbehavior. Democratic leaders should seek a concurrent resolution of censure expressing the sense of both houses of Congress that Trump’s conduct is “unbecoming of a president of the United States and worthy of formal censure by the United States Congress.” Specifically, the resolution should note that Trump (1) turned a blind eye to unlawful Russian efforts to subvert the 2016 election; (2) conspired to violate the campaign finance laws by orchestrating secret, illegal hush money payments; and (3) unlawfully attempted to hamper the Mueller investigation into Russian meddling in American elections. 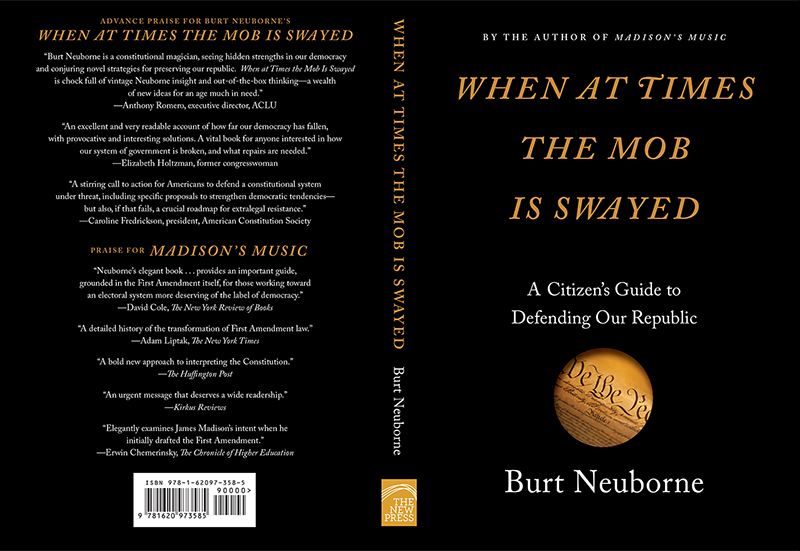 (When at Times When the Mob Is Swayed: A Citizen’s Guide to Defending the Republic will be released by the New Press on August 6, 2019.)

There have been at least 37 resolutions of presidential censure introduced and enacted by a single chamber of Congress. But such one-house censure resolutions have generally been viewed as symbolic partisan acts by a president’s political opponents and have almost never involved allegations of criminal conduct. Richard Nixon doesn’t count because he resigned before Congress could censure or impeach him. A concurrent resolution of censure enacted by both houses would transcend partisan politics because it would require Republican support in the Senate. It would also provide a practical way for a divided Congress to respond to a president who is guilty of criminal misbehavior but who is above the criminal law.

A concurrent resolution of censure is preferable to impeachment both from a practical and a democratic process perspective. Practically speaking, the Democratic House can enact all the impeachment resolutions it wants by a majority vote. But in the Republican-led Senate, it will be all but impossible to find 67 members who will vote to convict Trump of high crimes and misdemeanors and to remove him from office. In fact, unless new evidence materializes, even a single Republican Senate vote for conviction is unlikely, much less the 20 Republican votes needed to reach the two-thirds threshold for conviction. It remains unclear how many of the 47 Senate Democrats would support removing Trump from office.

Even if 67 “guilty” votes materialized by magic, a successful effort to undo the outcome of the 2016 presidential election would unleash widespread political turmoil, further embittering the electoral climate, and making it all but impossible to establish a stable post-Trump government. Sixty-three million Americans voted for Trump. They will not take kindly to the cancellation of their votes. Nor, frankly, should they. In the end, the “cure” of impeachment might well turn out to be worse that the “disease” of Trump’s appalling behavior.

A bicameral concurrent resolution of censure, in contrast, provides a practical alternative that supports the democratic process. Unlike impeachment, which requires a two-thirds vote in the Senate, a concurrent resolution of censure requires only a majority vote in each house. A censure resolution would likely sail through the Democratic-led House of Representatives with the unanimous support of the Democratic majority. On the factual record laid out in the Mueller report, a House censure resolution might attract considerably more than 50 Republican votes. A concurrent censure resolution could even garner 51 votes in the Senate. It’s possible that, after hearings and debate, at least four principled Republican senators would join the 47 Senate Democrats in censuring the president. Don’t forget, the vote on confirming Supreme Court Justice Brett Kavanaugh was 50–48.

Unlike impeachment, which would cancel the results of the 2016 election, a bicameral censure would enable voters to pass judgment on Trump in the 2020 election with the knowledge that both chambers of Congress had, with bipartisan support, formally rebuked his behavior. Don’t underestimate the political power of censure. In 1954, a Senate resolution of censure ended Senator Joseph McCarthy’s reign of terror. John Adams was the target of the first-ever censure resolution in 1800. The political fallout played a role in his defeat for reelection. Andrew Jackson was censured by the House in 1834 for keeping information from Congress about his removal of the Treasury Secretary for refusing to withdraw government deposits from the Bank of the United States. The ensuing political fallout eventually led to a recognition of Congressional oversight power. John Tyler was censured by the House in 1842 for abusing his veto power. James Polk was censured for lying about the reasons for the Mexican-American War. James Buchanan was censured for irregularities in military procurement. Abraham Lincoln modified his behavior to deflect a censure resolution. William Howard Taft was censured for meddling in a contested Senate election. Censure resolutions literally rained down on Richard Nixon prior to his resignation.

Until now, though, there has never been a concurrent bipartisan censure resolution enacted by both houses of Congress. But, until now, we’ve never been faced with a president who committed multiple criminal acts but whose control of the Department of Justice has placed him above the law. Impeachment is both impractical and perhaps unwise. A concurrent bicameral resolution of censure  would “indict” Trump before a jury of the people, who would — and should — then have the final say at the polls.

Burt Neuborne is the Norman Dorsen Professor of Law at NYU’s School of Law. He is the author of the forthcoming book, When at Times When the Mob Is Swayed: A Citizen’s Guide to Defending the Republic.