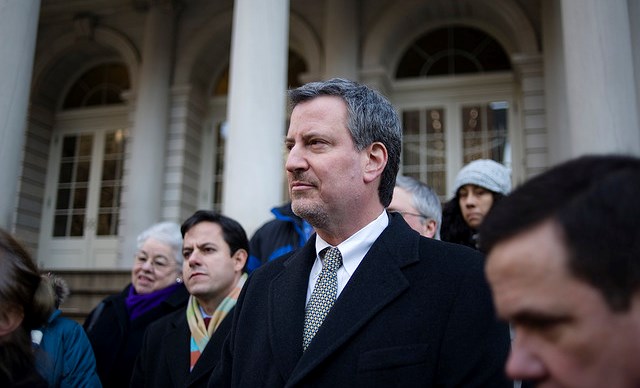 Crossposted from The Crime Report.

When Mayor Bill de Blasio announced he was dropping New York City’s challenge to a law that makes it easier to sue police for racial and religious profiling, it was the second piece of good news for minorities in his tenure so far.

It’s now time for the mayor to turn his attention to the NYPD’s mistreatment of another minority community: Muslims who have borne the brunt of the post 9/11 police surveillance.

Details of the surveillance program were revealed in 2011 in a Pulitzer Prize-winning series by the Associated Press, which documented how the NYPD spied on Muslims in restaurants, grocery stores, laundromats, and even in their mosques.

A federal judge in New Jersey recently held that the NYPD Muslim surveillance program was just fine. Of course the police were going to spy on Muslim communities, the judge said, that’s where the terrorists could be found.

This rationale was rejected in the stop-and-frisk judgment that de Blasio let stand. It’s also the type of program that’s forbidden by the city’s racial profiling law, which the mayor has supported. Indeed, late in his campaign de Blasio became increasingly worried about the NYPD’s focus on Muslims, saying that surveillance should be based on “specific leads.”

Requiring a lead to investigate is the opposite of spying on people because of their religion or race.

It’s also more effective. If there is one thing we are beginning to understand about counterterrorism, it’s that dragnet surveillance doesn’t work.

The head of the NYPD’s Muslim mapping programs admitted under oath that the operations yielded no leads. At the federal level, President Barack Obama’s hand-picked review board expressed doubts that the National Security Agency’s massive data collection yielded much actionable intelligence.

Such operations may even make us less safe.

Muslim New Yorkers should be the natural allies of the police. They, perhaps more than anyone, fear another terrorist attack carried out in the name of Islam. Not only could an attack kill or injure their fellow citizens, but their communities will feel the fallout for years to come.

By pushing Muslims away, the NYPD has risked losing its greatest source of information about real terrorist plots.

In appointing Bill Bratton, the mayor lauded the new police commissioner’s focus on building trust with minorities. Although Bratton’s record on these issues isn’t nearly as exemplary as some have reported (the Los Angeles police were first to float the idea of a Muslim mapping program of the type actually conducted by the NYPD), he has certainly set a new tone at the NYPD’s headquarters, meeting with civil rights and community groups even before he took up the job.

But Muslims, like other minority communities, are waiting to see what he does.

They know firsthand the devastating impact that police spying has on communities. In New York, Muslim leaders report that fewer people go to mosques, and those that do are suspicious of strangers fearing they are informants.

Most Americans may not care whether Muslims are free to worship without worrying about government inference. But religious freedom – for all of us – is one of the principal promises of the Constitution. Notably, empirical research shows that mosque attendance correlates with greater participation in civic life and integration. And those are certainly outcomes that we wish to promote for all communities.

De Blasio has a chance to set things right.

Two lawsuits currently pending in federal courts in New York challenge the Muslim surveillance program. Both are in early stages. But the city needs to decide whether it will continue the Bloomberg/Kelly legacy of refusing to admit that it could ever do anything wrong or whether it will correct course.

The time to act is now, before litigation positions harden and the new administration is locked into the bad choices made by the old order.

In announcing that the city would drop the stop-and-frisk appeal, Commissioner Bratton, said: “We will not break the law to enforce the law. That’s my solemn promise to every New Yorker, regardless of where they were born, where they live, or what they look like. Those values aren’t at odds with keeping New Yorkers safe — they are essential to long-term public safety.”

Bratton and his boss have kept this promise to the victims of racially motivated stops. They should honor this commitment to the Muslim New Yorkers who have been the target of religiously motivated surveillance as well.