This week in Illinois, a group called Campaign for 2016 ran a TV ad attacking state Supreme Court Justice Lloyd Karmeier for failing “too many crime victims.” In Michigan the week before, the Center for Individual Freedom sponsored an ad praising Justices Brian Zahra and David Viviano for “throwing the book at violent child predators.” While ads attacking or supporting a judge’s criminal justice record may not seem shocking to voters, the fact that these ads may have actual sway in a courtroom should. According to a recent study by the American Constitution Society (ACS), criminal justice-themed campaign ads may be pressuring judges to appear tougher on crime when deciding criminal cases.

In their report, authors Joanna Shepherd and Michael S. Kang found that the more TV ads aired in a state Supreme Court election, the more likely justices are to vote against criminal defendants in the cases they hear. (According to the study, “the researchers coded whether the justice, sitting as a member of a multi-judge appellate panel, voted in favor of the criminal defendant on appeal.”) The report also found that justices in states where bans on corporate and union spending in elections were struck down by Citizens United — thus opening the door to new forms of independent spending on television ads — are less likely to vote in favor of criminal defendants than they were before the decision, making high-cost Supreme Court elections a serious impediment to a criminal defendant’s right to fair and impartial justice.

Many of the most strident attack ads criticize justices for being too lenient on criminal justice matters. A 2011 ad sponsored by the Wisconsin Club for Growth claimed Justice David Prosser protects sex offenders.

And even more recently, in 2014, an ad by Justice for All NC declared that Justice Robin Hudson was “not tough on child molesters, not fair to victims.”

The presence of these ads is worrisome not only for the negativity they inject into judicial races, but for the political pressure they place on judges to rule a certain way. Faced with the prospect of being attacked in numerous negative TV advertisements throughout an election, judges may be tempted to bolster their criminal justice record and become “tough on crime.” Whether it is done consciously or unconsciously, ruling against criminal defendants may make judges less susceptible to nasty campaign ads.

Shepherd and Kang also found that “as the number of airings increases, the marginal effect of an increase in TV ads grows,” meaning the more ads aired, the more damage they can do. 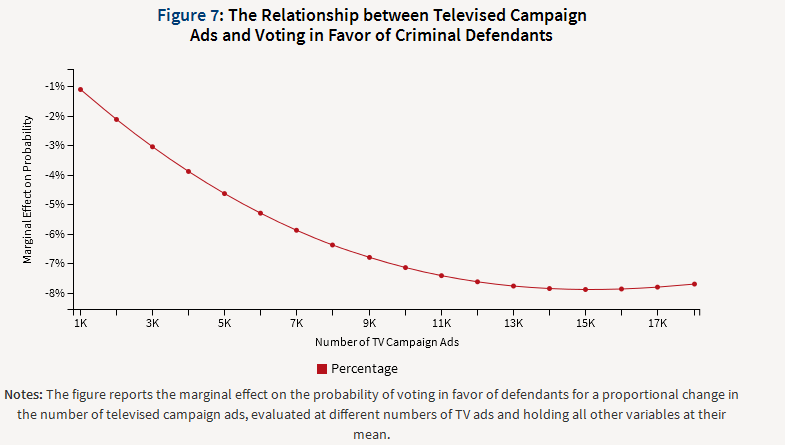 This situation is compounded in the states that had corporate and union spending prohibitions struck down after Citizens United (other states did not have bans in place and were not directly affected by the ruling). With judges in these states facing potential new sources of funding for attack ads, the study found that they will now vote differently — and  against — criminal defendants in 7 out of 100 cases.

While it is not possible to bar outside groups from sponsoring TV ads in judicial elections, candidates can be called on to adopt voluntary conduct standards. Every candidate running for the Ohio Supreme Court this year signed on to the state Bar Association’s “clean campaign agreement,” which asked them to “publicly disavow ads from [non-candidate] sources that impugn the integrity of the judicial system or the integrity of a candidate for Supreme Court, or that erode the public’s trust and confidence in the independence and impartiality of the judiciary by verbally or visually attempting to lead voters to believe that a candidate will decide in a predetermined manner.”

States should also produce comprehensive voter guides, and independent judicial performance evaluation commissions should review the qualifications of each judge up for reelection, so that voters do not have to exclusively rely on attack ads for information about judicial candidates.

With mid-term elections less than a week away, state high court races are likely to see an influx of campaign ads in the next few days. While these ads will no doubt have an impact on the 2014 races, they are also likely to continue affecting our courts long past the time voters cast their ballots.